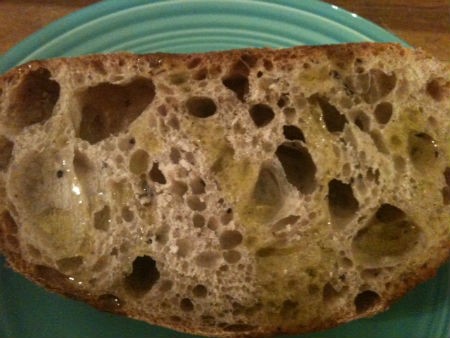 Picking a favorite bread from Companion (8791 Clayton Road, Ladue; 314-352-4770 and 8143 Maryland Avenue, Clayton; 314-721-5454)? It's not easy. Not even a little. But if forced to choose in some terrifying situation involving firearms or knives not meant for loaves, Rustic Olive Bread are the words tumbling from our mouths.

Companion doesn't use the Rustic Olive Bread on any sandwiches at their cafes, but that's OK -- toppings would just get in the way of the earthy, slightly sour flavor. The Kalamata olives give a tinge of bitterness, but their flavor is subtle enough to please even the olive-haters among us.

With a drizzle of olive oil filling the airy holes and softening the chewy crust, it's bread that isn't just the backdrop to some sandwich; it stands on its own.

Although we wouldn't complain if we happened to have a slice topped with salami.