This is part two of Emily Wasserman's Chef's Choice profile of chef Peio Aramburu of Bistro 1130. To read part one, click here. Part three, a recipe from Aramburu, can be found here.

Did your family cook when you were a child? Yes. My mom had a big garden with every type of fruit and vegetable: kiwis, cherries, figs, almonds. My parents were raised to cook, so they carried on the same tradition with our family.

First cooking job? My first job was in college, and it only lasted six months. I was in engineering school, and between playing rugby and having fun, I didn't really have time for cooking.

What do you eat? Bread is my favorite. I also like fresh fruit and salads with protein.

What do you cook at home? I don't cook much. If I'm working here, I don't have time, and on my days off, I go to try restaurants. If I'm with my two daughters, though, I like to make easy things so they can help me with the cutting and mixing. My [younger] daughter Maleah likes salads and fruits, but I also make meatballs and pasta. Pancakes are a tradition.

What are your three favorite restaurants in St. Louis (besides your own!)? Mosaic, Vin de Set and Sanctuaria. I haven't gone out much because I've only been in St. Louis a year and a half, but I really like all the restaurants on Sidney Street.

The local chef who most impresses you? I know the chef at Sidney Street Café. He worked with a chef I know from the Basque country, Berasategui. I like his cooking.

Your favorite restaurant elsewhere? I have two: Mugaritz in San Sebastián and Biko in Mexico City. Mugaritz is actually in a small town close to San Sebastián, and is ranked the fifth best restaurant in the world. I go to San Sebastián every summer, so I always stop by when I'm there. I also like Alinea in Chicago because I'm a fan of molecular gastronomy. In molecular gastronomy, all the components are there but just in a different form. It's working with liquid nitrogen and chemicals to make regular food in different ways. You can have a gin and tonic where the tonic is in Jell-O form, and the gin is a mousse, but when it all comes together in your mouth, it tastes exactly like a regular gin and tonic.

Your favorite food city? San Sebastián. It's my childhood, but it's also the tapas paradise of the world. There are good restaurants and good wine because San Sebastián is surrounded by good regions: There's France and Bordeaux wine country to the north and Barcelona to the south. It's surrounded by the sea, gardens and the culture of the duck: foie gras. Bars are packed with plates and tapas, and they're always crowded. I like the concept of bars being in the same neighborhood. Here you have to drive to different bars.

Favorite local food find, and where do you get it? Haven't found anything yet, but still on the lookout.

One food you dislike. Nothing. I don't dislike anything. Depending on the situation, I'll try anything. For example, in Mexico, if a woman has been selling fried grasshoppers for the last 25 years, I'll try it. Here, I'd pass. It depends on the situation. I'd eat raw snake heart in Vietnam, but not in San Francisco.

A food you can't live without. Bread.

An ingredient never allowed in your kitchen. Pre-made lasagna, Cool Whip...I'm open to anything, whether it's a protein, vegetable root, something new or traditional, but I refuse to buy ketchup for example. [I'd] rather than make it. In my restaurants, I don't want to see pre-prepared mixes or spices. I make my own.

Culinarily speaking, St. Louis needs more... Creativity. I think that sometimes, people get turned off by crazy-sounding ingredients or want a certain flavor because they're used to it. I would say let the chef make the decision for the combo of flavors, and to try something even if it sounds crazy. If the customers support good places in town that use fresh ingredients, then it will create new places that are more food-forward in terms of flavors. Also, I think St. Louis needs fresher seafood. If 25 other restaurants ask for the weird types of fish, we could get it. But unless the customer is more adventurous, we can't.

What's next for you? I have no idea. 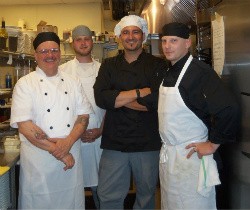 What inspires you? The produce inspires me and also the stress. The stress motivates me to do my best work.

Chefs who inspire you. At the start of my career, a chef at the restaurant I worked at said that if I wasn't proud to serve a dish, then don't serve it. Today, I'm inspired by Mikel Alonso, the chef at Biko in Mexico City.

Proudest professional moment? Winning the Missouri Iron Chef in 2003. It was a fundraiser, but my family flew in from Spain to watch me. I cooked seven different dishes, and the secret ingredient was mushrooms.

Favorite music to have in the kitchen. Anything, but it has to be in tune; when it's just making noise, and the sound isn't good, it isn't worth having on. It has to be close to perfect, otherwise I can't take it. I whistle along, but I'm not musical.

What's on your pizza? Whatever my date or partner wants. I'll eat anything. I don't really like pineapple, or Hawaiian pizza, but I'll still eat it. My favorite types of pizzas are simple, with two main flavors. My mouth doesn't need to be a fiesta.

What's in your omelet? A slice of prosciutto and a little cheese.

What are you drinking? Ninety percent water and a couple beers. I like Stella Artois at this moment, but it depends on my mood. I like beers from smaller breweries like Schlafly. I like to give my money to the small places rather than the big companies.

What's the most surprising food you've eaten? Edible Rocks from Mugartiz. It tasted like potatoes. It goes back to molecular gastronomy, where you eat crazy things that actually taste good.

What's the most difficult lesson you've learned in this business? I haven't learned many lessons, but I guess I've learned about the hours. The hours are terrible.

When did you know the chef's life was for you? I don't know it yet.