The French are known for making love, not war, but their other specialty is making pastries. From buttery croissants to crusty baguettes to sweet treats of all sizes, shapes and flavors, French bakers are le chat's meow.

Though the U.S. has little hope at besting the French at their own game, that hasn't stopped stateside bakers from trying. One common example: the pain au chocolat, a croissant whose flaky, buttery layers give way to a center of melted chocolate.

In the spirit of liberté, égalité, fraternité (and gluttony), Gut Check decided to pit the two most prodigious local purveyors of pain au chocolat against one another to see who does it better: La Bonne Bouchée (12344 Olive Boulevard, Creve Coeur; 314-576-6606) and Saint Louis Bread Co. 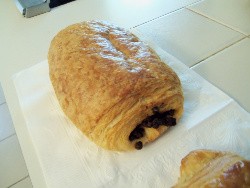 In fact, it's about twice the size and would be referred to in France as "maxi," the equivalent of a super-size in the U.S.

Big, yes, and pretty darn tasty, the many layers of flaky croissant harboring morsels of sweet chocolate. That's right; we said morsels. An authentic pain au chocolat has a pair of long, thin bars of chocolate located at the center. La Bonne Bouchée, however, substitutes a generous helping of chocolate chips, evenly dispersed throughout the interior of the pastry. To which we say: Sacré bleu!

After our experience at La Bonne Bouchée, we half-expected the pain au chocolat at Saint Louis Bread Co. would be proportioned somewhere along the lines of a Sherman tank. After all, Bread Co. is an American chain, and a Midwest-based one at that, and "more is more" is as red, white and blue a concept as Budweiser.

Imagine our surprise, then, when the pain au chocolat we were served was, well, petite. That was fine with Gut Check, even though it cost more, because, hey, we're all about quality up in here. But this croissant was not all about quality. It had a crust that was limp and an exterior that was oily. It did, however, deliver just the right amount of chocolate, in just the right manner. It was as if Bread Co. was giving La Bonne Bouchée a metaphorical slap in the face.

The Verdict OK, so La Bonne Bouchée's pain au chocolat gives the French classic an American twist. It also delivers the goods. Its layers of croissant were flakier and fresher than its Bread Co counterpart, and it isn't all bad to be treated to a morsel of melted chocolate in nearly every bite.