Adding the Question Mark to It's a Better Burger 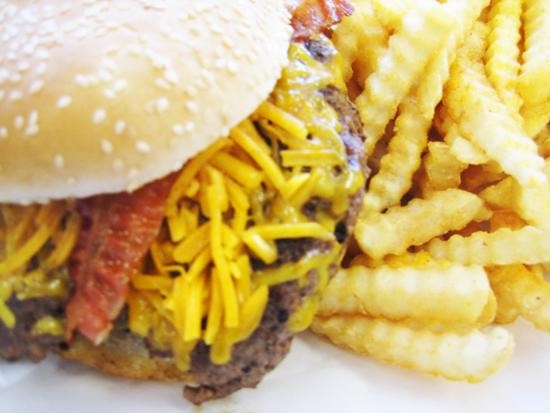 The Verdict: The period -- and the factual certainty that it conveys -- is implied in the name of this restaurant. This here is a better burger, full stop.

If only it were that easy.

It's a Better Burger follows the pattern of Five Guys Burger & Fries and other "better-burger" joints, with patties of fresh (i.e., never frozen) ground beef cooked to order on a flattop grill. An It's a Better Burger burger -- just rolls off the tongue, don't it -- is a half-pound of meat. You can add cheese and/or bacon and then top it as you like from a small fixings bar (lettuce, tomato, onion and jalapeño as well as ketchup, mustard, mayo and barbecue sauce).

I topped my burger with cheddar cheese and bacon, but the patty is so large -- if I didn't know how carefully most restaurants watch their food costs, I'd suspect it was actually more than a half-pound of beef -- their flavors provided little more than a slight accent.

(As you can see in the photo above, the cheese is grated, not sliced; though some of it was unmelted at the moment I snapped the shot, the heat of the burger melted it by the time I took my first bite.)

The It's a Better Burger burger is all about the burger. Unfortunately, this hunk of ground beef was cooked all the way through, without even a hint of pink at its center. Without the mineral note that even a medium-temperature burger can offer, the patty was bland -- and, given its size, a chore to eat. Supposedly, the recipe includes "secret seasoning" to enhance the flavor, but I tasted nothing intriguing.

The fries are crinkle-cut and, aside from a sprinkling of seasoned salt, relatively tasteless.

I suppose this is a better burger when compared to generic fast-food patties. But considering the increasing competition in the better-burger segment, It's a Better Burger will have to raise its game before it can put that period after its name.