Eight Fast Food and Alcohol Matches Made in Heaven 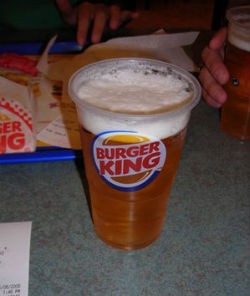 Taking lead from a handful of Whopper Bars -- Burger King restaurants that serve beer -- and a few Seattle Starbucks outlets that have started serving beer and wine in the evenings, Sonic's jumping on the fast food booze bandwagon. Two drive-ins in southern Florida plan to start selling wine and beer this summer.

Forget about buying booze if you're in a car. These Sonics will only serve alcohol to patrons seated on the patio or in the dining room.

With the growing number of fast food outlets resorting to alcohol sales to boost their bottom line, here are some bar menu suggestions for other fast food spots that might want to jump on the booze wagon.

America runs on Drunkin'! Or it will, if the donut chain would add Adult Chocolate Milk to the menu. Served as the base for its mochas or straight up, it'll get your day off to a lovely, if fuzzy, start.

For the 1 percent of Taco Bell customers who don't arrive at the outlet having already over-consumed, add some tequila to an icy, fruity Frutista beverage. Eating the worm ensures that your Taco Bell order contains a meat product.

Why doesn't Long John Silver's embrace British origins? Really, it's serving fast food fish and chips. Perhaps it's the lack of alcohol. Convenient plastic bottles of Strongbow Cider might cut through the grease and won't cause too much damage if they get bashed over a bloke's head.

Chick-fil-A operates under a strict moral code from its corporate headquarters and God, so it would never, ever serve devil liquor. Except for the black sheep Chick-fil-As, which are running moonshine from their pickle factories. Just don't plan on imbibing on Sunday. White Castle Whisky at White Castle

Filipino whisky -- it's what you crave. White Castle Whisky markets itself as being the best whisky from the Philippines. Who's going to argue? It's probably as high-quality as anything you'll get from the restaurant of the same name. Slider and a shot!

Good mood food, indeed! Why waste perfectly OK horseradish sauce on pressed beef when you can squirt it into a glass of vodka and tomato juice, forgetting that you were ever thinking Arby's in the first place?

Poor Dave Thomas. His good girl's gone bad with this naughty mix of Jagermeister, peach schnapps and cranberry juice. Available in single, double or triple, and always in an uncalled-for square shape.

Del Taco? Anything But Bud.

In light of last week's sudden departure of Del Taco from St. Louis, we're pretty sure it won't be serving Budweiser in any of its outlets. And frankly, we don't really care.