Film adaptations have the dual task of not only being good in and of themselves, but maintaining a certain loyalty and respect to the story's original form. When it comes to comic books adapted into films, there's an extra element -- the nerd factor.

See, nerds are really into the things they're into. Whether it's, as in this case, comic books, or movies, music, video games or a massive collection of action figures still in their original packaging, nerds fight valiantly (well, verbally, at least) to protect what's important to them -- the essence of what they love, the core of their nerdom. 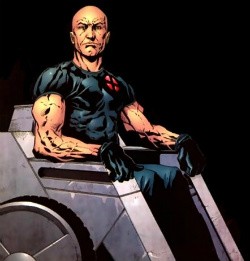 And though some of us at Gut Check could definitely be filed in the nerd folder (we won't point fingers), we set aside our apprehensions and prejudices toward an X-Men movie that portrays Professor X as upright and with a full head of hair.

X-Men: The First Class, while just the teensiest bit self-indulgent and corny at times, delivered. Packed with the homoerotic undertones, in-references, well-choreographed fight scenes and, of course, cameos we've come to expect from our comic-book movies, we dare say this latest origins tale compensated for that mess of a movie they called Wolverine.

What better way to top off a mutant-filled evening and hours of post-movie nerdversation than with a tasty mutant pie from none other than Mr. X (5922 Morganford Road; 314-353-7060)? See, this was no ordinary pizza pie. The Mr. X employees kindly fulfilled our request for a half-cheese, half-veggie pizza -- creating a dinner reminiscent of heterochromia, a mutation which causes an individual to have two differently colored irises.

OK, OK, it's not a mutation per se, but that's part of Prof X's pickup line, and it seems to work pretty well on the ladies with mismatched eyes, so we'll roll with it.

Furthermore, mutant comic-book characters have a long history with this simple culinary delight -- after all, it was the glue that held the Teenage Mutant Ninja Turtles (and presumably, the walls of their arteries) together.

A trip to the south-side pizzeria was an ideal end to a night at the movies, and a simple-but-satisfying hand-tossed pizza was an easy, casual meal -- well-suited for lengthy dinner debates on important issues, such as the degree of Magneto's evilness (moderate) or the awesomeness of Wolverine's cameo and single line of dialogue (very).