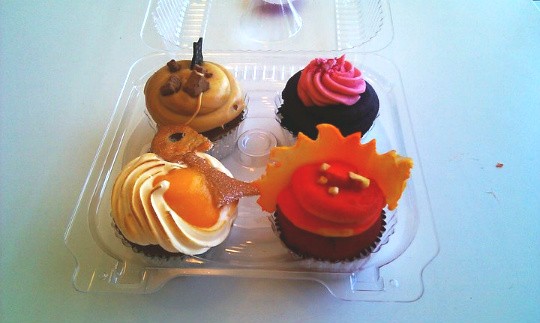 After Tuesday night's show, the secret's out: Jilly's Cupcake Bar (8509 Delmar Boulevard, Ladue; 314-993-5455) won Food Network's Cupcake Wars challenge. Chefs Casey Shiller and Dana Holland took home the $10,000 prize and bragging rights by baking for a party honoring the first men to travel to space, Yuri Gagarin and Alan Shepard. Hearing that the four winning treats featured on the show would be sold today at the bakery, Gut Check ventured up Delmar for an afternoon sugar fix.

You can purchase the Jilly's prize winners, which will become part of the regular menu, individually for about $6 each or in a pack of four for about $20. The flavors reflect the out-of-this world party theme: "Island in the Sun," a pineapple cake topped with freeze-dried mango pieces; "Meringue-a-Tang," a Tang-filled almond-orange cake; "Space Monkey," a banana-toffee cake capped with chocolate astronaut ice cream; and "Raspberry Fizzion," chocolate-raspberry cake garnished with fizzy candy.

Going straight for the "Meringue-a-Tang," we didn't know what to expect. Would the beloved Tang orangutan from the drink's commercials circa the '90s appear out of nowhere upon first bite? He didn't, but the cupcake gave us enough of a kick without him. We're pleased to report that it tasted more like a fresh orange than the powered stuff.