They can't talk about it. Everyone there knows how it ends, but no one can say a thing.

If that sounds intense, it's because it is. The cupcake market has become a competitive niche. And Jilly's Cupcake Bar (8509 Delmar Boulevard, Ladue; 314-993-5455) knows just how intense that rivalry can get. Especially after being pitted against other cupcake warriors from across the nation on the Food Network's new show Cupcake Wars.

Jilly's was selected after submitting an audition tape via YouTube, making it the first to represent St. Louis on the show. The video, like the business itself, is pretty tongue-in-cheek, says Casey Shiller, a certified executive pastry chef.

Shiller wasn't able to tell us much about the show or who won, but he did talk to us about what it's like to fight for the high ground in the cupcake wars.

Shiller: Well, it's myself and Dana Holland, who's the executive chef at the store. We start training, and it's very tongue-in-cheek: Dana's weightlifting with cupcakes, and I'm picking up buckets of buttercream. Then we take one of our normal-sized cupcakes, which is a jumbo, and we show it next to a normal-sized cupcake, which is what other bakeries around town make. And we show what we're going to do to the competition. We drop our cupcake on the other, and it obliterates the little cupcake.

So what did you want to get across in the video?

Our message is size does matter, and it's cute. We like to play off the fact that we're both really big guys, and we both have girl's names.

It's hard to believe that there's actually a market for just cupcakes.

Oh yeah, there's a market in St. Louis, and we want to make sure we reign supreme over it. 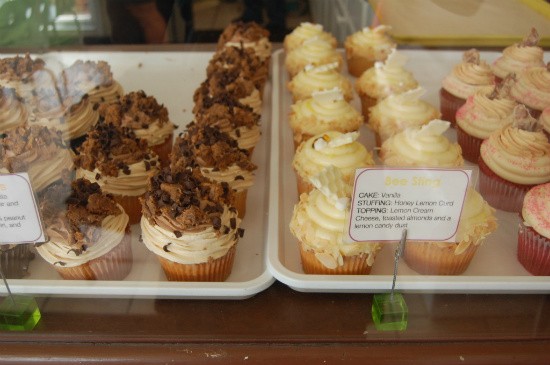 Why do you think this market emerged?

I think it gets back to fond memories of childhood. Everyone loves cupcakes. You can't frown when you hear the word "cupcake."

What is it about cupcakes that's so great?

It's the perfect dessert in just a few bites.

You guys have some really interesting cupcakes; how do you settle on flavors?

We have nine cakes that serve as the backdrop for most of our cupcakes. We use that, and then we try to play with some of the basic flavors that everyone likes. Like vanilla, for example: We took a vanilla cake and baked a piece of cheesecake in the middle of it.

Has there ever been a cupcake flavor that hasn't worked?

We tried to push the envelope like with our maple-bacon cupcake. It was actually phenomenal.

To watch Jilly's in the Cupcake Wars and see who won the $10,000 first-place prize, tune into the Food Network at 7 tonight.