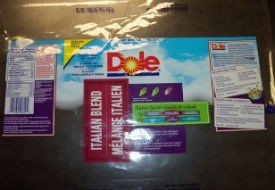 It's been a busy few days at the FDA and USDA, recalling lots of potentially contaminated goods.

It's salad season! Unless you've got a potentially-tainted bag of salad in your fridge. Some 2,880 cases of Dole Italian Blend salad with a use-by date of June 19, 2011, have been recalled by the FDA for possible listeria contamination. Kroger Fresh Selections Italian Style Blend salad is also included in the recall. The salad was distributed in twelve states, including Illinois.

Cantaloupes have a nasty reputation for harboring salmonella bacteria in their bumpy skin, which is exactly why the FDA reports that Kandy recalled 1,760 cartons of cantaloupes shipped to Sam's Club stores in upstate New York and Pennsylvania.

The USDA takes care of meat recalls, both far away and close to home. Specialties Agro Alimentation in Millington, New Jersey, had to recall 5,700 pounds of imported boneless Serrano ham that might be contaminated with listeria. The ham was distributed nationwide.

So far, no illnesses have been reported from any of these recalls. Although we have to question the health of anyone who purchases sausages from a door-to-door salesperson.