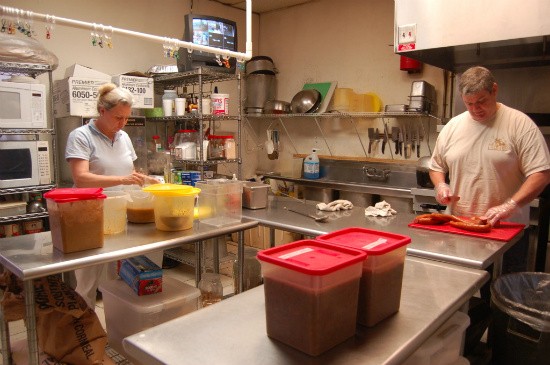 After ten months of studying, practicing, tasting and refining, Holli and Jon Rercher have taken over ownership of the Gumbo Shop (9501 Manchester Road, Webster Groves; 314-918-8747).

The shop was opened by Sid and Mary Roberts in 2000. The couple brought its Louisiana knowhow and Cajun cooking to St. Louis in order to be closer to family, Jon Rercher tells Gut Check. The plan was to stay for ten years, then head back south -- and that's what the Robertses did.

Sid handed over the shop over to Jon on Tuesday, June 14, and with it came dozens of family recipes. The Robertses have some experience with restaurants: They owned two of their own, and Jon co-wrote a cookbook with his family. But other than a few visits to New Orleans, the Gumbo Shop marks their first acquaintance with Louisiana cuisine.

But they knew the shop well and were confident they were taking over a business that had a solid foundation.

"We were one of Sid and Mary's first customers eleven years ago," Jon says.

"If you have a great foundation, you have something to build on," he adds. "And Sid's family recipes are remarkable. So we just continued the tradition he started."

For months, Jon watched and learned the art of Cajun cooking. He videotaped Sid as he cooked and took notes of every measurement while Mary imparted to Holli the ins and outs of running the front of the store.

"Real Cajun is a multitude of textures and flavors at once," Jon says. "Like gumbo, for instance: the shrimp, the sausage, the underlying hint of okra -- it's wonderful. Every bite is something different."

As for Cajun cuisine's reputation for leaning toward off-the-chart spicy, Jon says that's a misconception.

"Now, I can make it so hot your toenails sweat," he says, "but that's not what we want to do."

Instead the husband-and-wife team aims to serve up authentic Louisiana-style cooking with all its rich nuances of flavor. And the transition seems to be going well in its early days.

"The only complaint we've heard so far is that we're not next door to everyone," Jon says, "that we're not in Clayton or Kirkwood or downtown."