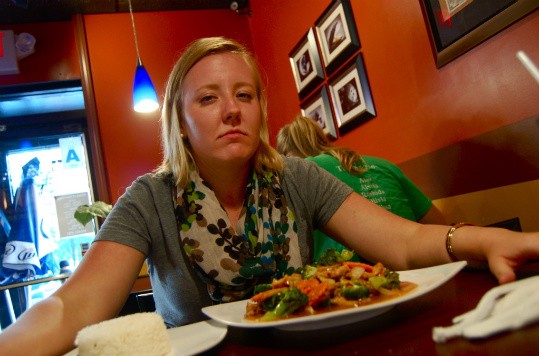 When Pearl Cafe (8416 North Lindbergh Boulevard, Florissant; 314-831-3701 or www.pearlcafestl.com) introduced its spicy-food challenge this past November, it wasn't so much a contest as it was a way to appease lava-loving family members who griped that the joint's food wasn't hot enough. A friend of manager Tommy Truong had grown a batch of ghost peppers -- which rank three notches down from pure capsaicin on the Scoville scale -- and just like that, the challenge was born.

It took off when the restaurant began posting Fail Blog-style photos of competitors on its Facebook page.

The challenge consists of four heat levels, set at 25, 50, 75 and 100. Compare that to the time-honored Thai-restaurant tradition of classifying spiciness on a scale of 1 to 5. Do the math; we're talking hot in here.

The concept is simple: Competitors must polish off in a single sitting one dish of their choice that's been seasoned to Level 25. Then you move on to Level 50. You can space out your challenge over several visits, but you can't skip a level, and if you fail to complete a level, you're busted down to Level 25 and must start anew. There's a surcharge of a few bucks for each dish.

Intrigued? So were we! But as much as Gut Check wanted to partake, doing so would void the terms of our palate-insurance policy. No matter; Gut Check International HQ is crawling with low-wage scribes and no-wage interns who'll do just about anything for free eats. It took all of 30 seconds to round up an unsuspecting victim a willing participant, whereupon we scooted her off to Pearl to get it on... 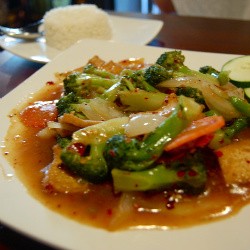 ...Only to discover that our contestant would have to comply with a long-ass set of rules:

Challengers have 45 minutes to finish each level, and their plate must be clean in order to move on to the next round. Clean, in this case, pertains to food and sauce. (Truong will bring out a shot glass to spare contestants the indignity of licking the crockery.) No substitutions. No sharing. No leaving the table to go outside or use the restroom. Water, soda and beer are the only permissible beverages.

None of these obstacles daunted Gut Check's handpicked challenger, though she was a little irked when Truong said women tend not to fare as well as men (not because they can't stand the heat but because it's simply too much food). A total of 46 diners, the vast majority of them male, have conquered Level 75, and only 11 have completed Level 100. Truong tells of one aspirant who began feeling squeamish while ingesting Level 100, left the restaurant and nearly wrecked his car before finally extinguishing the fire by pouring a gallon of milk down his piehole.

While our competitor toiled away at her amped up broccoli stir-fry (she's a vegetarian), Reed and Dan, an uncle-and-nephew tandem at a nearby table were also engaging in the challenge. Trembling and tearing up, the latter struggled with his Level 25 curry dish, eventually failing to dispense with the sauce. Having previously achieved Level 25, Reed polished off a 50.

Though it pains us to say it, Gut Check's designated devourer proved more of a Dan than a Reed. Her face turned beet red after the first bite, and her eyes watered. At one point she complained of deafness, and three-quarters of the way through her dish she stopped eating, pulled a $10 bill from her wallet and said it was either that or puke on the spot.

"There, there," murmured Gut Check as the tears continued to flow -- though we couldn't help pointing out that her choice of beverage -- Diet Coke -- had been unwise.

Should have gone with milk.