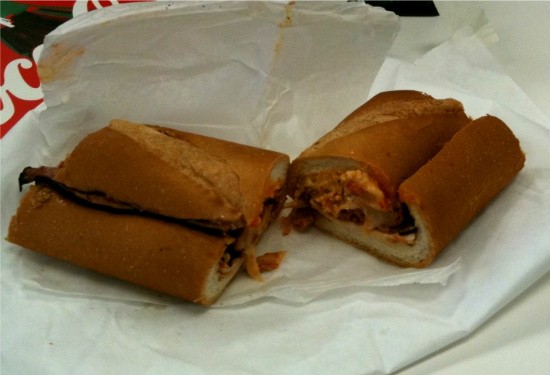 Whether you're new to St. Louis or have lived here your whole life, you know there are some things you'll be ridiculed for if you haven't experienced. Never had Ted Drewes? What's wrong with you? Never boiled in the sun on the bleachers during a Cardinals game? Fuhgeddabout it.

High up on the list of St. Louis musts is visiting LeGrand's Market & Catering (4414 Donovan Avenue; 314-353-4059), the popular South City neighborhood market. LeGrand's operates like a mini grocery store, with small aisles filled with dairy, produce and dry goods. The large deli and meat counter is where all the action is, as regulars line up to place their order for fine cuts of meat, seafood fillets, fresh barbecue and Boar's Head cold cuts.

Since meat is treated like fine wine at this place, LeGrand's sandwiches have quite the following. Served up hot or cold on your choice of 7" French or wheat bread, LeGrand's sandwiches are stuffed with Boar's Head meats, cheeses and flavorful sauces. Sandwiches range from the simple to choices with four or five different meats. On the menu, a little pepper wearing a sombrero indicates the spiciness of the sandwich, and since Gut Check likes things hot, we went straight for the three-pepper Legend Club.

The Legend is built with spicy Salsalito turkey, pastrami, pepperoni and bacon. This harmonious blend of meaty perfection is topped with hot pepper and Havarti cheeses, and if that wasn't enough, the sandwich is finished with a silky garlic cream cheese and a tangy roasted red pepper sauce. It's definitely spicy, but not overwhelmingly so, and the meats are layered in the perfect ratio so you can taste them all in every bite. As far as LeGrand's sandwiches go, the Legend has a bit of everything -- except veggies, of course, but who needs 'em?