Super 8 and a Mighty Kids Meal 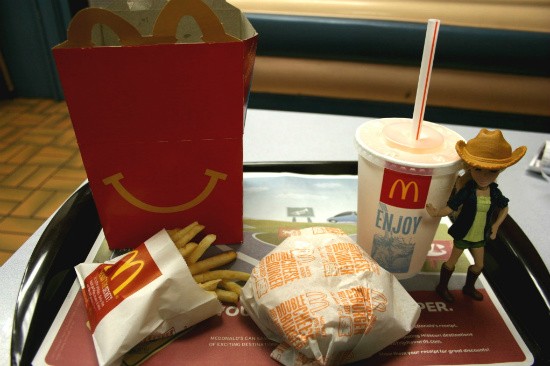 Summertime is exciting -- vacations, relaxing, realizing you no longer fit into your swimsuit. Here at Gut Check, we think the best part of those sweltering months is the roster of big summer movies -- and 2011 is no exception. After all, there's the last film in the Harry Potter saga, yet another Transformers flick and half a dozen huge comic-book movies, all in theaters this summer. What do you do when you're up against that?

You give J.J. Abrams and Steven Spielberg $45 million to make a movie together, apparently.

... and it works. See, in 2011, most movies fit pretty strictly into a rigid genre. Whether it's indie, horror, chick flick, comedy or a kids' movie, there aren't a lot of mold-breakers. But leave it to Spielberg and Abrams to challenge that. Super 8 manages to bring a universal appeal to the screen the likes of which we haven't seen in years.

It's a movie movie. Apparently, The Goonies knocked up E.T. circa '86, producing Super 8 -- a lovechild, now of age, that grew up on modern thrillers and CG animation.

In other words, it's everything we'd ever wanted a movie to be. It's so well-made, from the casting to the acting to the music to the cinematography to the dialogue, that it's easy and enjoyable to lose yourself in the story and suspend your disbelief. It's the foul-mouthed adolescent adventure of Goonies and the magic of E.T. -- soaked in nostalgia and Joe (Joel Courtney)'s precious tears.

While Alice (Elle Fanning) shines as both a rebellious tween and an endearing zombie, the young cast as a whole is superb. And make sure to stick around for the credits -- the audience is treated to the super 8 film that got them into the mess in the first place.

Nah. Clearly, these tough cookies were scarfing down Mighty Kids' Meals from Mickey D's. How else do you explain their ability to ride bikes for hours, produce films all night and run from the mysterious, murderous creatures and explosions that punctuate their days?

A Happy Meal just wouldn't provide enough protein (really, ONE hamburger patty? Make that a double!), and it wouldn't seem appropriate anyway. These kids are troubled, strong, lovable -- but "happy" would be oversimplifying things a bit.

Plus, with the recent death of his mother and the distance of his father, it's safe to assume that little Joe has eaten his share of well-balanced fast-food dinners.

Of course, after consuming all 790 greasy, corn syrupy, tasty calories, Gut Check didn't feel like riding bikes or jumping fences. In fact, we didn't feel very mighty at all. Maybe our body's storing the energy for might-or-flight situations. Or perhaps we just don't have the metabolism of a thirteen-year-old anymore.