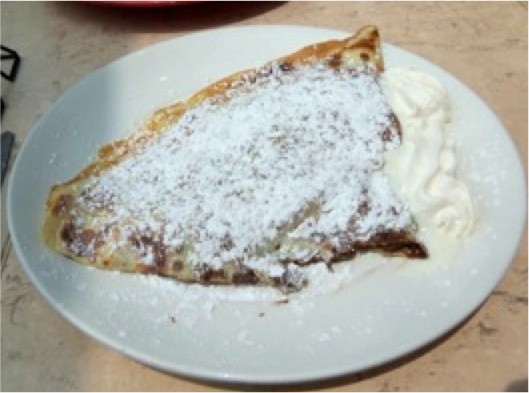 Walking the streets of Paris, you can't escape the fragrance of one of France's most beloved dishes. You follow your nose toward an unassuming Frenchman, who pours batter onto a giant hotplate, throws on some chocolate syrup and voilà! Your crêpe is ready for consumption.

Far from its Parisian origins, City Coffeehouse & Crêperie (36 North Brentwood Boulevard, Clayton; 314-862-2489) serves up a French classic with an American twist. Instead of one light, buttery crêpe shell filled with toppings such as brown sugar or fruit, the crêperie -- as it's fondly known -- serves its signature dessert crêpes with a light dusting of powdered sugar and little mountains of fresh whipped cream on the side.

Combining soft, ripe slices of banana with warm, melted Nutella, the Nutella-banana crêpe is probably the pièce de résistance of the café. (For the deprived among us, Nutella is a rich chocolate-hazelnut spread.) Less we forget to mention the light, buttery original crêpe shell. Oh wait, make that two: The Crêperie serves up the delicious confection on two crêpe shells, creating a four-layer dessert that is sure to please.

Whether you're pining for the sweet crêpes from past experiences abroad or been waiting your whole life to try Nutella on a warm, buttery crêpe shell (trust us, you have), stop by City Coffeehouse & Crêperie for a Nutella-Banana Crêpe. You won't want to walk away until you've said "au revoir" to the last bite.