Subway and Avocados and Green Lantern? Movie and Product Tie-ins We'd Rather See 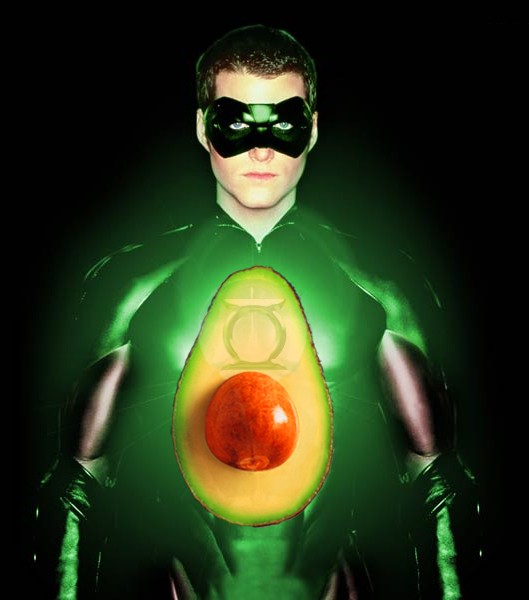 While not watching television the other day, Gut Check looked up in time to catch a glimpse of the new Subway commercial that gets all hot 'n' bothered about avocado. Did you know avocado is a SUPERFOOD?

Land's sake, of course we do! Whether super- or sub-, food is Gut Check's bread and butter. Still, we paused, watched the ad, then went back to eating our grapes, which we have flown in from Greece along with a raven-haired nymphet who peels them for us and delicately places them one at a time upon our tongue.

Then we saw this ad:

OK, avocado, trendy (and still trending) superfood, meets Subway. But what penny-loafered marketing hack came up with the idea of blending guacafuckingmole with The Green Lantern?!

Is that the best tie-in they can come up with?

Anything Subway can do, Gut Check can do better -- and in about ten minutes. Herewith, a handful of far better marketing tie-ins to 2011's summer movie crop...

Rise of the Planet of the Apes & Jack Link's Beef Jerky Directed by Rupert Wyatt (The Escapist), this re-imagining of the classic sci-fi franchise stars James Franco and features CGI work by Weta Digital (Lord of the Rings, Avatar)

Translation: The plot doesn't matter. Call it "Messin' with Roddy McDowell." The key here is that while Sasquatch is a dumbfuck, mutant apes are smart. Behold the power of jerky! 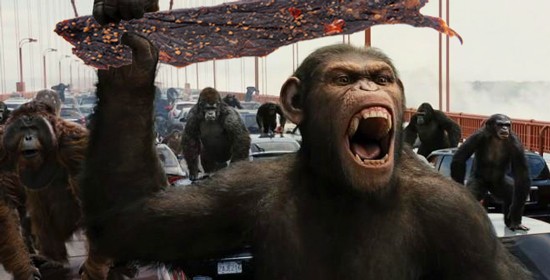 Conan the Barbarian & Hardee's Charbroiled Turkey Burger The pertinent question, of course, is: What drug was being ingested in copious quantities by the person who came up with the idea to give Conan a redo? Can Gut Check Have some? None of our crappy-movie remake ideas has ever been turned into a major motion picture!

Look, Planet of the Apes was different. People actually went to see it and liked it. In 1982, when Arnold Schwarzenegger and James Earl Jones hit the nation's summertime screens in Conan v1.0, Vincent Canby of the New York Times summed it up nicely: "Conan the Barbarian is an extremely long, frequently incoherent, ineptly staged adventure-fantasy set in a prehistoric past."

Be that as it may, far from being the proverbial porcine application of lipstick, a tie-in with Hardee's turkey burger campaign would sock the film's target demographic right in the Congressman Weiner. (And it wouldn't hurt Hardee's one bit.)

Cowboys & Aliens & Reese's Pieces OK, now that we're cookin' with Crisco, it's time to break out the heavy artillery. In the annals of product tie-ins, nothing comes close to the hookup between the makers of E.T.: The Extra-Terrestrial and the makers of Reese's Pieces.

Cineastes are no doubt familiar with the backstory: Steven Spielberg's people offered Mars, Inc. a deal to cross-promote M&Ms with E.T. Mars told the film company to take a hike. Which they did, to the Hershey Company, which had a product -- Reese's Pieces -- that was sufficiently similar to M&Ms for the purposes of the film. Hershey, which wasn't moving many Reese's Pieces, said sure. The film was released with conspicuous product placement and cross-promotion, whereupon sales of Reese's Pieces (and of movie tickets) went through the roof.

And yes, lightning can strike more than once in the same place.

Everything Must Go & Pabst Blue Ribbon Rainier beer would be truer to the Raymond Carver short story this film's oh-so-loosely based on, but PBR's got hipster cred and is available nationwide and Raymond Carver's dead and...oops, never mind -- they figured out this one all on their own. But where are the damn Will Ferrell Pabst ads?? 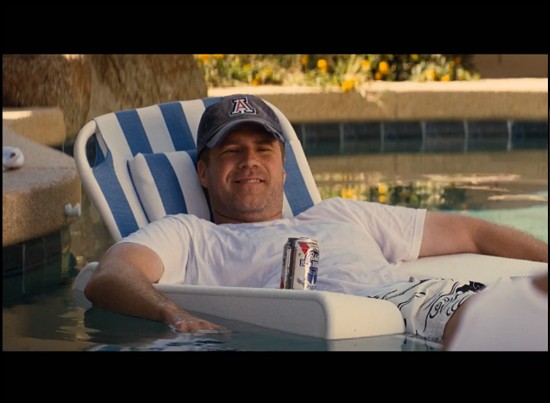