What's Worth More: Food or Cash? 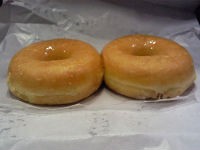 Three not-too-bright robbers in Hyannis, Massachusetts, attempted to rob a Dunkin' Donuts last week. They demanded a paper bag an employee was carrying in her purse and ran.

Because so many paper bags at Dunkin' Donuts are filled with cash instead of doughnuts.

The robbers weren't so lucky. All they got was a bag of doughnuts and a trip to jail.

This got us thinking, are there restaurants where a bag of the food would be preferable to a bag of cash? Sure, a bag of the pork duo from Niche (1831 Sidney Street; 314-773-7755 or www.nichestlouis.com) or egg raviolo from Acero (7266 Manchester Road, Maplewood; 314-644-1790 or web.mac.com/thecrossing) would be awesome, though terribly messy. But what about bags of food from Corporate America's dining establishments?

With coffee bean prices on the rise, grab the shopping bag of coffee beans and run like the dickens. We'll be using them as currency soon.

Go with the pressed meat sandwiches. Because Wendy's just sold Arby's, there's probably not going to be any cash in the store anyway. Use the sandwiches to ward off packs of stray dogs.

Since Hardee's recent ad campaign brags about the gigantamous size of their burgers, there's a good chance you won't be able to lift a bag of them. Especially if you've been eating Thickburgers, you'll get winded. Take the cash and don't hurt yourself.

Depends. How stoned are you? Chipotle

You're going to need a team of hooligans like the ones who robbed the Dunkin' Donuts to get a bag of burritos out the door. But if you do, you won't have to eat for two weeks.

Baby Jesus hates stealing and will send you to Hell to sizzle in eternal damnation like a waffle fry if you even think about it.

Buckets of chicken are awkward and hard to carry while fleeing, so go for the cash. Then give half the cut to the Juvenile Diabetes Association, just because KFC doesn't see the irony of giving it a buck for every half-gallon jug of soda it sells.

It doesn't matter what you take. Just don't take if if there's a cop in line behind you.