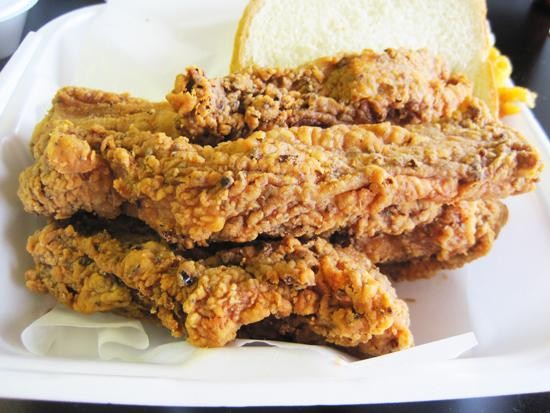 As a friend and I prepared to leave Bigg Daddy's Fried Ribs (2812 North Grand Boulevard; 314-531-7427), chef Tony Reason came out of the kitchen and asked what we thought of the restaurant's namesake dish: battered, deep-fried ribs.

We gave him the thumbs up -- slowly, oh so very slowly, so weighed down were we by what we'd just eaten.

"Why fried ribs?" we asked.

Reason told us about a family reunion he'd attended in Chicago. At this event, there were equal amounts of traditional smoked ribs and fried ribs. The fried ribs vanished first. After he witnessed the same thing happening at another event, his path became clear.

Biting into a fried rib -- pictured here as a "dinner" order, four ribs plus two sides for $8.95 -- is a little like biting into a piece of deep-fried chicken, though with a higher fat-to-meat ratio, each bite through the crisp, gnarled batter into the greasy, scalding meat is even more intense.

I can't guarantee you'll love or even like these ribs. Each person has his or her own tolerance for deep-fried fare -- especially unusual deep-fried fare. And if you can't stand the thought of frying a rib, know that Bigg Daddy's serves decent smoked ribs, too.

But, really, you should at least try it. Split an order with a friend or even two. Believe me, split a few ways, it will still be more than enough.