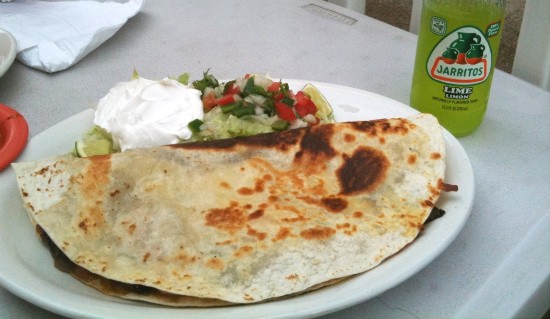 The many restaurants that line Cherokee Street feature menus full of sizzling fajitas, deliciously cheap tacos and other Mexican standards. One dish, the quesadilla, tends to be passed over at these authentic establishments because it's been ruined on menus across the country. It seems like everything from imitation Tex-Mex joints to sports bars features a bland cheese-and-chicken quesadilla option on the appetizer list.

But Gut Check has faith in the quesadilla, and at Tower Tacos (3147 Cherokee Street; 314-256-1141), we stumbled upon something a little different: the Quesadilla Azteca. It was hard not to be intrigued. On the colorful menu, the Quesadilla Azteca is described as a giant flour tortilla, grilled and stuffed with shrimp, cheese, mushrooms and beans. Yes, that's correct. Just four ingredients, which at first glance might not seem to play well together, especially at a Mexican restaurant.

The result of this combination is nothing short of pure genius. The tortilla is indeed massive and wonderfully crunchy with a slight char from the grill. But it's the innards of the Azteca that set it apart from those other cheese-heavy triangles masquerading as quesadillas. Silky beans, tender shrimp and meaty strips of mushroom topped with a just-right amount of cheese make for a gooey, flavorful filling. Each ingredient is presented in the perfect ratio so every bite features a bit of everything, and with its size, there's a lot of bites to go around.

Served alongside a dollop of sour cream and a bright, crunchy pico de gallo of chopped bell peppers, tomatoes and zesty cilantro, the Azteca is a behemoth of taste and textures for $9.45. Paired with a lime Jarritos, a Mexican soda that tastes like a melted ice pop, and a seat at a picnic table on Tower Tacos' skinny patio, this meal epitomizes all that is great -- and unexpected -- about Cherokee Street.