The U.S. Government Runs on Free Snacks -- So How Does Missouri Stack Up? 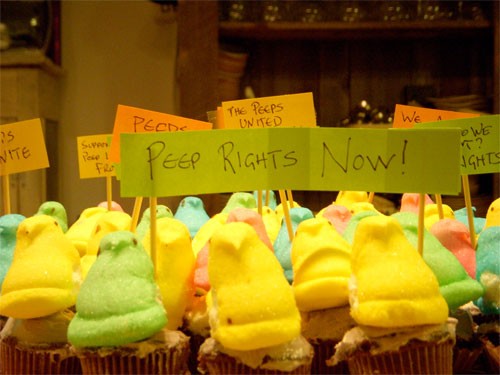 In any office, no one is more likely to get visitors than the person who keeps a candy jar on his or her desk. This is just as true in the humble offices of the RFT as it is in the hallowed halls of the U.S. Congress. The New York Times did an expose of sorts the other day wherein fearless reporter Jennifer Steinhauer trolled the Congressional office buildings in search of representatives who share the foods of their home districts.

It's true that not all snacks are equally magnificent. In an informal taste test, it was determined that the peanuts distributed by the Virginia delegation are far superior to those from Georgia, Oklahoma and Alabama. (The Georgians, however, do have lots of Coca-Cola products to compensate.) Senator Lisa Murkowski (R-Alaska) has been known to share her state's salmon jerky. And Representative Devin Nunes (R-California) gives out individually wrapped prunes, which would probably only be appreciated by the severely constipated. Meanwhile, visitors to Representative Jason Altmire (D-Pennsylvania) get sugar cookies.

Gut Check, being the possessor of an eagle eye, could not help but notice that Steinhauer did not visit anybody who represents the fair state of Missouri. What the hell, we figured, we could finish the job ourselves.

Or so we thought. We admit Steinhauer had the great advantage of actually being able to walk into people's offices and see what they were handing out instead of having to depend on the phone. But still.

The young woman who answers the phone at Representative Lacy Clay's Washington office helpfully forwards us to Steve Engelhardt, Clay's press secretary, who happens to be in St. Louis. "I haven't seen anything like that," he tells us. "It's possible."

We have a similar experience with the young man we reach at Representative Todd Akin's office. "I don't see anything," he says, after taking a minute to examine the premises. "Oh, we have some water." But he declines to give us his name, claiming that Akin's press secretary, Steve Taylor, who also happens to be in St. Louis, could better field the question.

We have better luck with Representative Russ Carnahan's people. "We don't leave out any food," says Sam Drzymala, after requesting that we hold on a second while he pulls up Steinhauer's article. "We haven't found anything suitable."

Well, there is a very obvious product of Missouri that would make visitors very happy, isn't there?

"Yeah, Bud," Drzymala agrees. "But it's not suitable."

Senator Claire McCaskill, however, has no qualms about plying her visitors with beer. Trevor Kincaid, who works in her Washington office, reports that McCaskill keeps lots of Bud and also Fitz's root beer on hand in her reception area. And yes, it's on ice.

Don't worry -- it's not your tax dollars at work. Kincaid explains that the products can only be given to congressional members by the manufacturers as gifts.

Alas, Kincaid continues, he's not had the chance to sample any of the beverages. "I hear [Fitz's] is really good," he says. "People always drink it."

What local products do you think our congressional representatives should be handing out in their offices? Tell us in the comments.

Media News of the World WTF?