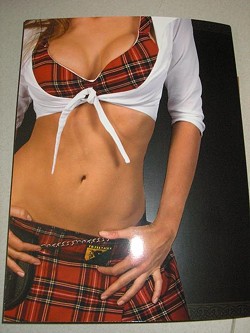 Last week, I looked at an Eater article about "dead" dining trends in New York City and whether those trends have yet to arrive, let alone die, here in St. Louis.

This week, I can report that St. Louis is well ahead of the curve of one trend that, based on press coverage this week, has blossomed to the point where the public is starting to take notice.

Yes, this is the clever portmanteau that someone created for Hooters and its ilk. Entrepreneur reports on the boom:


Franchises inspired by the Hooters model -- such as Celtic-themed sports bar chain Tilted Kilt Pub & Eatery and faux mountain sports lodge chain Twin Peaks -- have expanded rapidly over the last half decade, while corporate-owned chains like Brick House Tavern + Tap and Bone Daddy's House of Smoke are picking up steam regionally. In fact, for the next couple of years, this segment (often referred to as "breastaurants") is poised to be one of the fastest-growing restaurant categories.

Heck, St. Louis might be ahead of the curve. We are already home not only to (multiple) Hooters, but also to Tilted Kilt Pub & Eatery and Brick House Tavern + Tap, not to mention Show Me's and other local places that I'm probably forgetting because, honey, I never frequent these joints.

Of course, New York City has found a way to outdo us. The newest trend there? Bikini brunch, at a restaurant and club called Lavo. The twist here, according to Grub Street (via Gawker) is that not only will there be "dancers" wearing bikinis, but female diners will be encouraged to don their skimpiest swimwear.