McDonald's Introduces the UK to Incorrect Tastes of America 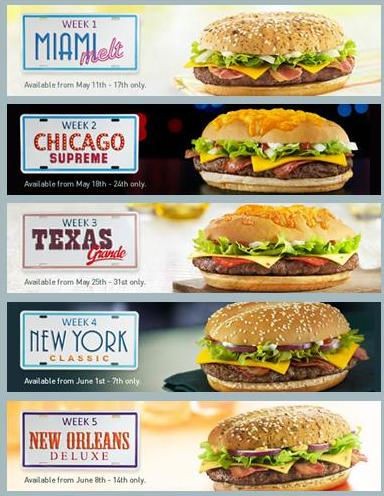 Because mediocre fast-food burgers aren't nearly American enough, UK McDonald's restaurants are in the midst of their annual Great Tastes of America promotion. Each week for five weeks, McDonald's outposts in England and Ireland feature a burger that the great Americans in marketing think best represent a different part of America to their British patrons.

They kicked off this year with the Miami Melt: a beef patty, bacon, American cheese, cheese sauce, onions, and lettuce served on a chili, chive and sesame bun.

None of this particularly screams "Miami!" at us. Tossing a Filet-o-Fish onto a Quarter Pounder would be more Miami than this cheese beast.

The next week brought the Chicago Supreme, because what represents the Windy City better than salsa? How about salsa and mayo and a cheese-topped bun with the requisite burger, bacon, American cheese, lettuce and onions?

Would it be too hard to just throw some sport peppers, neon-green relish and pickled green tomatoes onto a burger with a poppy seed bun?

Just give 'em a McRib and be done with it.

This week the Brits are going to New York City, baby, with the New York Classic. But not really. It's just a bacon cheeseburger with ketchup, mustard, mayo, red onion and lettuce.

If they're not going to even try, why should we? Skip McDonald's. Surely there's a deli somewhere in London that makes a decent corned-beef sandwich.

Because a month of this ridiculousness isn't enough, next week McDonald's will foist the New Orleans Deluxe onto the menu. A po'boy? Muffaletta? God, no. They're going to take the leftovers from the past month and slap them together. Same burger, bacon, lettuce, red onions from most of the burgers, pepper-jack cheese, cheese sauce and the herbed buns from Miami and something they're calling "Cajun mayo," which could have Gorgonzola and anchovies in it for all we know.

The alternative? Just stop eating altogether. Go to a dark place and mourn yet another coffin nail in New Orleans culture, preferably while drinking a Sazerac McFlurry.

Of course, there's an ad campaign: