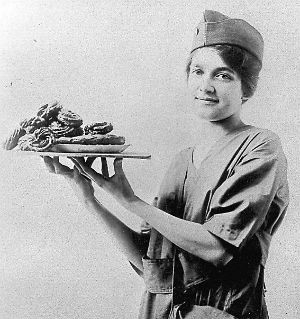 Friday, June 3, is National Doughnut Day, which sounds like it was created just to get people into doughnut shops and drop some change.

But that's not the case. During World War I women volunteered for the Salvation Army as "Doughnut Lassies." In 1917, 250 lassies served in France to assist soldiers. Using their minimal ingredients, they made fried dough as a comforting treat for the soldiers, thus creating Dough Boys.

In 1938 the Salvation Army created National Doughnut Day to honor the work of the Doughnut Lassies.

It's the American way to take holidays meant to honor selfless service and turn them into reasons for a day off from work and free stuff. So collect your free doughnuts on Doughnut Day!

Krispy Kreme stores will give a free glazed doughnut to each person who walks in the door, no purchase necessary.

Dunkin' Donuts is also giving away free doughnuts, but only if you buy a drink. Customers won't be limited to plain old glazed, though. They can choose whatever variety they'd like.