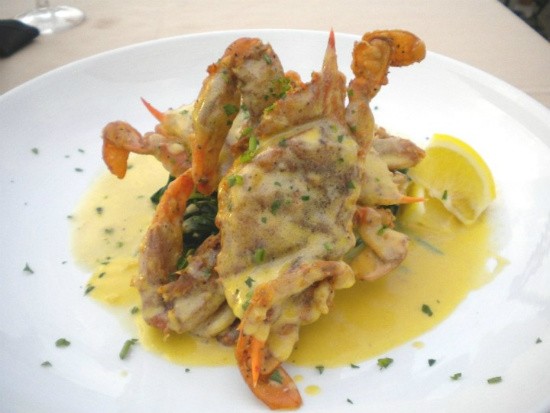 Traditionally, soft-shell crab season begins on the first full moon in May, when blue crabs in the Chesapeake Bay molt, leaving them with paper-thin shells. Theoretically, soft-shells are available until September, but good luck finding them in St. Louis after late June.

The rest of the year, a blue crab requires boiling, a wooden crab mallet and cuticles of steel to pick out tiny bits of meat. (Gut Check shudders and refuses to contemplate so-called crab cakes, those clots of seasoned bread crumbs.) During soft-shell season, however, the crabs only need a dusting of flour and a quick pan fry. The entire crab is edible: claws, body, even the paddle-like swimming legs.

If you want to be pretentiously hip, order some "peelers," which is what they're called in Maryland and Virginia. Your waiter or waitress will have no idea what you're talking about though. Instead, just be grateful you can eat them at all. The Chesapeake Bay blue crab population struggled in the past decade, but the population is rebounding well.

This particular specimen currently appears on the specials menu at Napoli 2 (1054 Town and Country Crossing; 636-256-9998). The appetizer size contains one soft-shell with a light mustard sauce on a bed of spinach, but the kitchen happily prepared an entrée-sized serving.

If you've spotted soft-shells at any local restaurants, please let us know in the comments. Gut Check prefers that they not be too tarted up, but does humbly suggest that they make a particularly lovely base for eggs benedict.