Mahatma Gandhi probably wouldn't be thrilled that we're fighting. But despite the hardships of his life, Gandhi never lived in a climate that rockets from 45 to 90 degrees in a matter of days. Such sudden charges into the flaming death heat can make some of us abandon our policies of nonviolence.

Tropical fruit keeps heat-intolerant people from going on rampages. Things can't be all bad when mangoes abound, right? Especially when mango pulp is blended with cold, tangy yogurt and thinned to a drinkable consistency.

Mango lassi originated in the Punjab region between India and Pakistan. Even though it's the northern part of India, it still gets hot. It's hotter there today than St. Louis, so they should know something about how to cool down.

We wiped off the sweat, stopped our whining and grabbed two cold glasses of mango lassi. 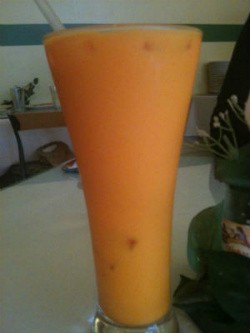 Gokul's mango lassi is a startlingly bright orange. Since mangoes vary in color, we can't say that the lassi had any color enhancement, but the hue's rather stunning. And it's thick. Really thick. When we removed the straw, the yogurt mixture coated it with barely a drip. A handful of ice cubes in the glass gave the lassi a pleasant chill, and with some time could melt, giving the lassi a more drinkable viscosity.

The flavor's assertive. So much so that the lassi doesn't match well with food. It starts with the heavy sweetness of the mango and only a hint of the yogurt's tartness.

With the combination of thickness and sweetness, Gokul's mango lassi works best as a dessert or a sweet treat, akin to an iced mocha. 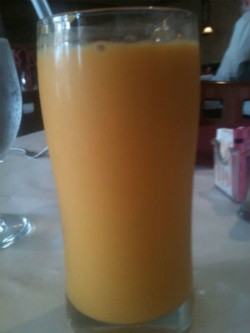 At first it seems the dimmer lighting at Flavor of India is softening the mango lassi's color. It's not. The drink arrives at the table looking like thick orange juice. Served without ice, it's just as cold as Gokul's version.

The differences don't end there. This lassi's much thinner, but doesn't lack smoothness or heft. It's roughly the thickness of melted ice cream. The flavors are more subtle with both the sweetness of the fruit and the tang of the yogurt shining through. It's delicate and balanced, a cooling accompaniment to spicy Indian dishes.

The Verdict While the confectionery qualities of Gokul's mango lassi aren't inherently bad, we prefer the lighter texture and flavor of Flavor of Indian's version. With its thinner consistency and delicate flavor, it worked best at cooling both palate and body temperature.