No, we're not making any fluctuating weight jokes. Instead, we share our seven favorite occasions when Oprah changed how America eats, for better or worse.

6. Oprah swears no more diets because of "Women, Food and God". But ... but ... Oprah's all about dieting! And weight loss. Until she read Geneen Roth's book, Women, Food and God last year. The book claims that women overeat to compensate for a disconnection with the spiritual world. Jesus, Buddha, Krishna, the Flying Spaghetti Monster can all make you put down the macaroni, ladies. Although without dieting, Oprah lost two-thirds of her material. No wonder she's closing up shop. 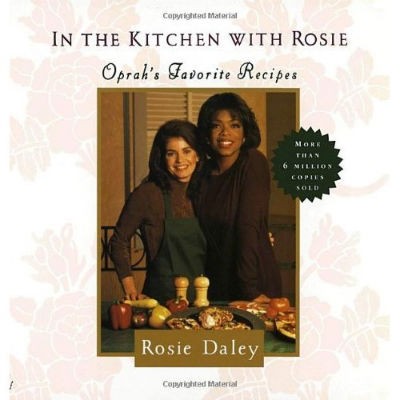 5. In the Kitchen With Rosie: Oprah's Favorite Recipes In 1993 Oprah paired with trainer Bob Greene and dietitian Rosie Daley to lose a tremendous amount of weigh in a most novel way - diet and exercise. Daley's recipes highlighted the low-fat '90s with recipes like oven-fried chicken that required marinating boneless, skinless chicken in yogurt to replace the fat. Want a copy? Amazon has nearly 3,000 of 'em, starting at a penny.

4. Oprah introduces us to a young Anthony Bourdain. Back in early 2001, shortly after he released Kitchen Confidential, Anthony Bourdain was just another chef with a book. Then Oprah included him on a show of experts giving inside tips to consumers. It was there that Bourdain uttered his classic advice to never order fish on Monday. We fell in love. Even when he chats with Oprah's pal Gayle King. 3. ... but Oprah also gave Rachael Ray her syndicated talk show. Without Oprah, Rachael Ray would have remained just another Food Network personality with a handful of interchangeable shows and some throwaway cookbooks. Thanks to Oprah, now we get to watch Ray make brownies with Saved By the Bell's Mario Lopez. Thanks Oprah. Thanks a lot.

2. Oprah's giant fat wagon. In 1988 Oprah lost a tremendous amount of weight in a most novel way - by going on a questionable prescription liquid diet. To celebrate, Oprah wheeled out a little red wagon filled with 67 pounds of animal fat, the equivalent of the weight she lost, while wearing the size 10 Calvin Kleins that had languished in her closet for years. Why didn't the Optifast diet work in the long run? Because it's not compatible with eating food.

1. Oprah shuns beef, gets sued, fights for the First Amendment and exposes factory farm ickiness. In 1996 Oprah did a show on Mad Cow Disease. When a guest discussed factory farming conditions, Oprah declared she'd never eat beef again. A group of Texas cattle ranchers sued, claiming that Oprah's anti-beef declaration hurt their business. They lost. Despite the fact that Oprah met Dr. Phil during her Texas trial and eventually gave him a show where he yells at people who eat too much, it was a pretty good deal.