This is part two of Deborah Hyland's Chef's Choice profile of Miguel Carretero of Guido's. To read part one, click here. Part three, a recipe from Carretero, can be found here. 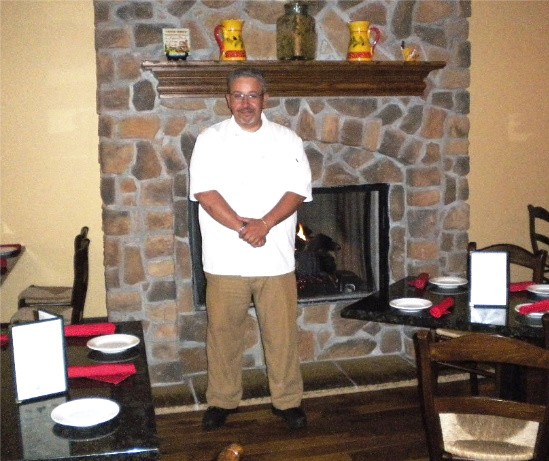 Did your family cook when you were a child? My mother cooked every night, but on special occasions, my dad would cook clams in wine broth.

How old were you when you started cooking? I know I was baking by age ten. We had a routine where on Saturday nights I would help my mom clean the house, then I would bake her a cake.

First cooking job? I was a bus boy at fifteen at Gianni's, and they let me help prep the bread and make amaretto pie. From age sixteen on, I worked as a pizza guy at Cecil Whittaker's.

Did you attend culinary school or college? Neither. I went to college for a short amount of time, but I was trying to run a restaurant at the same time. I opened my first restaurant at age eighteen, a little pizza place on Morganford. I just couldn't balance both.

What do you eat? It's a tough question. I've been at it so long, so I like simple stuff. Some nights I eat Spanish, but I've always been a meat-and-potatoes guy.

What do you cook at home? I don't. I've never even turned on the oven.

What are your three favorite restaurants in St. Louis (besides your own!)? Lately I've been trying to get out and try new restaurants, but I do like Michael's. O'Connell's, I like their reubens. Katie's Pizzeria on Clayton.

The local chef who most impresses you? My mother. How she can just whip out anything out of nothing. How she really puts her love into it. Simple food, but made with love. Your favorite restaurant elsewhere? My uncle's restaurant, Asador del Rey Fernando, on the outskirts of Madrid.

Favorite recent food find? Fried smelts. It's not on the regular menu yet, but we've just added it as a special.

Most essential ingredient in your kitchen? Olive oil. Favorite local food find, and where do you get it? We grow fresh tomatoes in our garden next to the restaurant. The first thing out of the garden this year was onions, which my dad scrambled up with an egg.

One food you dislike. Liver. A food you can't live without. I've been trying to eat healthier, eat more chicken and fish, but red meat is really hard to give up. An ingredient never allowed in your kitchen. I'm not completely against anything. Even though I don't like liver, if there was a liver dish that I thought was good, I'd make it.

Culinarily speaking, St. Louis needs more ... Authenticity. People get caught up in fettucini, cannelloni or cavatelli con broccoli and think that's Italian cuisine. I like to see more authentic dishes. Best tip for home cooks. Preparation. It's easier to cook when everything is chopped and ready. Favorite after-work hangout. I get off at 1 or 2 a.m., so I'm usually ready to go home.

Favorite kitchen tool. Either my pizza cutter, because that's how I started, or the Baker's Pride oven.

What's next for you? Probably remodeling the front dining room. It's a dream to have a side patio like McGurk's has. I'd be happy with just having a really nice garden that people can enjoy.

What inspires you? Making people happy. Chefs who inspire you. Mario Batali, I like how he cooks and his authenticity. Jose Andres has brought Spanish cuisine to prominence.

Proudest professional moment? The first day I walked in here, in April 2000, because I knew I could make something out of this place if I had a chance.

What's on your pizza? Lately my favorite is white sauce with spinach, chicken, bacon and a little bit of garlic.

What's in your omelet? I'm never up that early. What are you drinking? Iced tea. What's the most surprising food you've eaten? Percebes. It's a barnacle that looks like a hoof.

What's the most difficult lesson you've learned in this business? That friends and business don't mix, unfortunately.

When did you know the chef's life was for you? It's always been a big part of my life, so it's hard to distinguish that actual moment.