Riding Out the Rapture at Taste of Maplewood 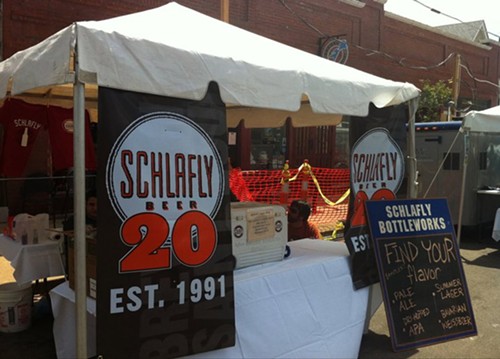 The Rapture didn't happen, and it's a good thing. When the festivities and food officially started on Saturday at noon, Taste of Maplewood was already bustling. White tents lined both sides of Sutton Boulevard; a few were manned by vendors offering services (Edward Jones, for instance, and Hatch), but food was the focus -- that, and an array of beer and boozy drinks.

Highlights included the Acero tent, where chef Adam Gnau tossed an ever-changing variety of pastas, including one with pancetta and fresh peas and another with tomatoes and cauliflower. "We're here to make the good smells," Gnau declared -- and made good on that promise. Saratoga Bowling Lanes offered the best drink bang for your buck, with a bucket-size hurricane for $5. (A closer look at the bucket revealed that it contained "four servings." Monarch was selling its Gumbo Dog, a link of snappy andouille topped with cheese, chicken gumbo and an oddly undressed fennel slaw. Las Palmas drew a constant line for its tender, steamy pork tamales and pork and beef tacos. Also offered: a head-kickin'-strong margarita.

Face time with the chefs was a nice opportunity to talk about food and their new upcoming menus. Maria Kveton, co-owner and chef of Water Street , filled Gut Check in about the restaurant's April 15 opening and its effort to utilize as much local produce as possible, such as the Missouri honey used in the "Honey Bee" cocktail. Maya Cafe was looking forward to the upcoming months of warm nights for its popular patio dining and servers were busy dishing up empanadas and beef brisket sandwiches with banana chips.

A huge main stage in the parking lot of the Wood featured live music from noon till 9 p.m. When the festival wrapped up for the night, Sutton Avenue was still teeming with hundreds of full-bellied, slightly tipsy and very happy sunburned folks.