In honor of Vincentennial, the one-hundredth anniversary of the birth of the actor Vincent Price, Gut Check decided to honor Price by cooking something.

Price, you see, was a noted gourmand. In 1965, he and his second wife Mary collaborated on a cookbook, A Treasury of Great Recipes, which collected recipes wheedled from the chefs at some of the world's most notable restaurants. It's a pretty good time capsule of what foodies were eating in the mid-60s -- and it's also a bit shocking to realize that back then, you could get a three-pound lobster for less than ten bucks. This from a fine restaurant mind you, not some random food-poisoning palace. 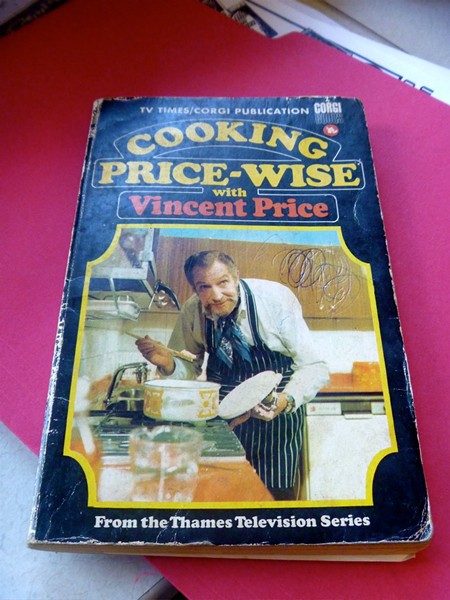 Gut Check got our hands on A Treasury of Great Recipes and also Cooking Price-Wise, the companion volume to the cooking show Price hosted on British TV in 1971. (Alas, clips from it are hard to come by, but Price got to demonstrate some of his kitchen skills in the 1972 movie Theatre of Blood. He cracked an egg one-handed, and then beat it in a bowl tucked under his arm. Well, Gut Check was impressed.)

But something about the recipes in those books didn't sit right with us. It's true St. Louis has never been known as a foodie mecca, but would it have killed Price to include one homegrown recipe? Fortunately, over at the Ladue campus of St. Louis Country Day, Price's alma mater, there's a stack of scrapbooks assembled by a former headmaster, Robert H. B. Thompson, and inside one of them is a newspaper clipping from the Globe-Democrat from sometime in the 1940s or 50s that bears the headline "Big Crowd at Finale of Cooking School: 12,000 See Vincent Price, Screen Star, in Frilly Apron and a Chef's Cap." Below it was the subhead "Price's Concoction" and a recipe.

Immediately, we knew this was exactly what we had been looking for.

Country Day archivist Cliff Saxton graciously Xeroxed the article for us (and put up with our repeated exclamations of "This is so awesome!"). It was only after we got back to the office and bothered to read the recipe and realized it was for bran fudge.

But it was too late. We were committed.

The article commemorates the "grand climax" of the Globe-Democrat Cooking and Home Making School led by Jessie Marie De Both, whose big gimmick was to force a "prominent man" to serve as her demonstrator before a big crowd at Washington University's field house. (Remember, this was about 50 years before the rise of the Food Network, which made it acceptable for men to cook in public.)

Price accepted the honor with characteristic good humor. "It's fun, really," he told the crowd at the conclusion of the demonstration. "I had little idea that cooking could be so simple or so enjoyable."

Could this have been the beginning of Price's fabled cooking career? The ingredients for the bran fudge comprised 4 squares chocolate, one-third cup of butter, 2 eggs, 1 cup of sugar, a half cup flour, a half cup of all bran, a half cup of "nut meats" and 1 teaspoon of vanilla extract. The item "all bran" confused us. The only thing we could find with a similar name was the cereal. So we went with it.

First we melted the chocolate over the pot of boiling water. (We used Ghirardelli: Only the best for our bran fudge squares!)

Then, per the recipe, we added the butter. In a separate bowl, we beat the eggs, added the sugar, the chocolate mixture, the flour and the All Bran. The recipe made no mention of what to do about the nut meats or the vanilla, but we tossed them them in, too. The end result was kind of lumpy. It was also so sweet it made our teeth hurt.

The recipe also didn't offer any guidance about which baking vessel to use, only that the batter should be one-third of an inch thick. We improvised with an eight-inch square baking pan, and we buttered the bottom liberally.

Frankly, we did not have very high hopes for this bran fudge -- though, based on the recipe and our previous baking experience, it seemed more like brownies than actual fudge. That was why we didn't attack it when it came out the oven (after 20 minutes of baking at 350 degrees) the way we usually do with brownies.

Instead, we let them sit for a couple of days and then took them to the office where we served them at an RFT staff meeting. The results were surprising. People liked them! One person, or even two, we could dismiss as a fluke, but these were multiple people. Some even demanded seconds.

So we tried it ourselves. It was definitely more brownie than fudge, and not even an especially fudgy brownie. There was a bit too much crunch for our taste, but the flavor of the chocolate wasn't too overwhelmed by the sugar. They weren't too crumbly, either. They might even make a good snack to watch during the many Vincentennial movies.

This gave us hope and even the courage to resolve to, sometime in the future, cook something from Cooking Price-Wise. It has an entire chapter devoted to bacon. How could we not?

Then again, this clip is making us reconsider:

In the Kitchen Media WTF?