Send Out the Clowns? 10 Potential Replacements for Ronald McDonald 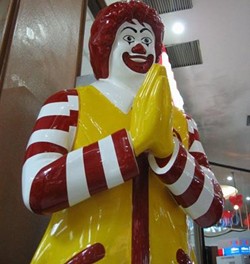 This week, a letter signed by some 550 health professionals appeared in several major newspapers, urging McDonald's to drop Ronald McDonald as its mascot.

Still, like any successful Fortune 500 company, McDonald's has a contingency plan should circumstances force the iconic clown into retirement.

10. Newt Gingrich: To say that the former Speaker of the House's presidential campaign has stumbled out of the gate would be an insult to stumblers everywhere. Newt would be well served to withdraw from the race as soon as possible and start cashing endorsement checks that the President of the United States cannot.

Besides, the marriage of Newt and McDonald's would be so perfect that he might not even wait to divorce his current wife to consummate it. What better represents Newt's beloved concept of American Exceptionalism than a company that has risen from a humble California burger shack to global titan?

9. A Member of the Donner Party: "Our food might be frozen meat of questionable origin, but in a pinch, it always gets the job done."

8. C. Everett Koop: Confident, sexy, bearded and primed for a nostalgia-fueled comeback. Also, he will accept McFlurry shakes in lieu of cash payment.

7. The Burger King King: Perpetual fast-food bridesmaid Burger King recently ditched the ad agency that came up with the leering, prank-pulling, giant-headed Burger King King. Not only would McDonald's tweak its rival by hiring him, it wouldn't have to pay writers to provide lines for the seemingly mute monarch. Fade in on the King standing in a Burger King parking lot, one hand holding a Happy Meal, the other grabbing his junk. Fade out.

6. Pippa Middleton: She wouldn't have to say anything, either. McDonald's could steal a page from the Hardee's playbook and have her fellate a Big Mac. Or it could just balance a burger on her naked rear. "You know you want to be between these buns."

5. Christopher Walken as Captain Koons in Pulp Fiction: Watch the famous scene for the umpteenth time, substituting McRib for "watch," and then try to tell us you wouldn't eat three a day.

3. Hosni Mubarak: Recently unemployed. Fade in on the deposed Egyptian leader sitting glum-faced at a McDonald's table. A group of children bring him a Happy Meal, serenading him with "You Deserve a Break Today!" Mubarak breaks out into a broad smile. Fade out.

Bonus: There would be potential to expand the campaign to other in/famous despots depending on developments in Libya, Syria, etc.

2. Violent J and Shaggy II Dope: Stop messing around with namby-pamby clowns and hire the two clowns today's kids love. "Fucking McNuggets -- how do they work?"

1. Grimace: The ultimate truth in advertising: A fast food chain represented by an amorphous, discolored blob.