The invention of bottled water was clearly a product of marketing genius executed so well that Don Draper gladly would've poured those greedy minds a stiff drink. Although that '90s trend implying health and status has been overshadowed by 21st-century trendiness (green! organic! Nalgene bottles!), bottled water still hasn't fallen by the wayside, somehow.

Crystal Light has been selling "water enhancing" powders for years, but now parent company Kraft Foods is doubling down with a liquid version aimed at a younger demographic. It's called MiO, and it looks way cooler than that staid old spinster Crystal Light.

Sucked in by Madison Avenue's advertising Hoover, Gut Check set aside our Kleen Kanteen and brewed us up a couple of batches of adult-appropriate Kool-Aid.

The Contenders Crystal Light Price: $2.78 for a 10-count box Calories per packet: 10 Crystal Light's packaging is convenient, particularly for inveterate water-bottle toters. The pre-measured packets are just right for a sixteen-ounce bottle and the powder readily dissolves when dumped in and shaken. (The mix also comes in bulk containers.)

Crystal Light is tasty, if a little too sweet. If we didn't know better, we'd have thought we were sipping the real thing (i.e., Kool-Aid).

MiO Price: $3.57 Calories per recommended 16 oz. dose: 0 MiO comes in a small, portable bottle that makes it easy to use in any quantity. However, it's a little difficult to measure out the suggested 1/2 teaspoon on the go, and the quick-dissolving water-based formula makes it impossible to eyeball. Of course, you can start with a little and simply add to taste. 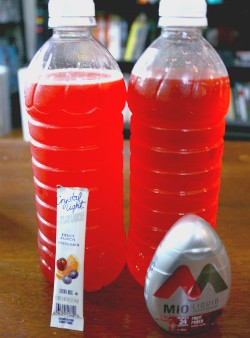 In spite of its deep hue, MiO carries only a mild fruit punch. Of course, the product's slogan is "Add a little or a lot!" But deployed at the suggested half-teaspoon per sixteen ounces, MiO creates a (dare we say it?) surprisingly satisfying thirst quencher, with none of the cloying qualities that mar the Crystal Light drinking experience.

If you like to spike your water with a lemon wedge or two, MiO's a nice change of pace.

The Verdict: MiO, by a long shot. Of course, the qualities that put it over the top -- mild flavor and quickness in dissolving -- are due to the fact that its primary ingredient is...water. Sure, it's tasty, but why not just drink water?

Plus, MiO has a serious downside: It will stain. Crystal Light will too, and so will Kool-Aid mix, but MiO looks and acts like food coloring: It's liquid, and a little goes a long way. Don't say we didn't warn ya.