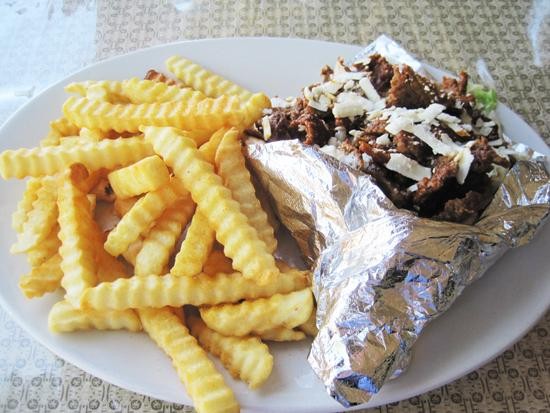 The Verdict: The gyro sandwich at South Grand Gyro Express was one of the first entries in my 100 Favorite St. Louis Dishes. A few months later, it shut its doors -- for good, I feared. Instead, in February of this year, it returned. I recently made it back for the first time since its reopening.

The gyro was good, the meat tender despite its thinness, the pita warm and soft. Yet the whole didn't live up to what I remembered from my review. The haze of nostalgia? Maybe, but the gyro meat looked to have been tossed in a sauce of some kind -- tomato-based or something similar, that is, not the cucumber sauce listed on the menu, which was also present.

Whatever the cause, the seasoning of the gyro meat didn't pop as much as I prefer. Again, this wasn't a bad gyro by any means. And for the price, with a side of fries included, it's a very good value.