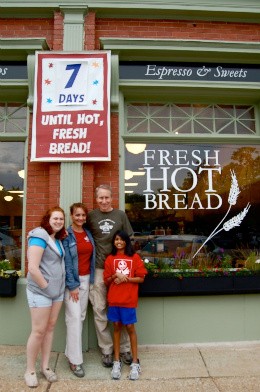 It's amazing what a little elbow grease; 3,600 pounds of whole wheat and 650 pounds of honey will get you. In this case, it got Tom and Judy Honigfort a new business, two new careers and a start to another chapter of their lives.

It hasn't been that long since Great Harvest Bread Company closed its doors in Kirkwood, Mo in 2008, but now that store will be reopening thanks to a young couple's dream that lasted over 20 years.

Tom and Judy have never owned their own business before now. Judy spent the last eighteen years raising three daughters, and Tom spent 30 years at AT&T before flipping corporate the bird and hitting the bricks.

But they're not worried about being new business owners or opening a store during an economic standstill. This is what they've wanted to do since they were newlyweds.

"On Saturday mornings we would walk to Great Harvest," Judy says. "We would sit in there and say 'oh wouldn't it be fun to own a place like this some day?'"

That was 20 years ago, but they haven't forgotten.

Now the couple is just days away from opening their very first store. They spent three weeks in Montana learning how to bake bread and be part of the Great Harvest franchise, then came back to Kirkwood to tear apart the building they had picked. It was not an easy job.

The location, at 125 W. Argonne Dr., was a post office in 1928 before it became Messenger Printing. So when Tom and Judy walked in, the beautiful storefront with transom windows, twelve-foot ceilings and polished wood floors was buried under years of dust and ancient printing presses.

The couple gutted the building, tore out eight feet of ceiling, replaced the plumbing and built a silo for the inside of the store. Two massive floor-to-ceiling ovens line the back wall and a keg of honey is all the couple uses to sweeten their handmade bread. They even mill their own wheat in the back.

All that's left is to finish stocking the jams, honey and fruit preserves and start baking. And based on a sample of the store's whole wheat bread, opening day can't come soon enough.