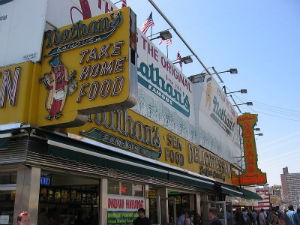 Over the weekend two people who played major roles in the modernization of the food industry died. Murry Handwerker, 89, of Nathan's Famous Hot Dogs passed away on Saturday. Canadian potato entrepreneur Wallace McCain, 81, succumbed to pancreatic cancer on Friday night.

Handwerker's father Nathan, a Jewish immigrant from Poland, opened the original Nathan's Famous on Coney Island in 1916. The founder did pretty well with his single shop. President Franklin D. Roosevelt even served Nathan's hot dogs to the King and Queen of England in 1939.

The younger Handwerker grew up in his family's business, and took over in 1946 when he returned from World War II. He expanded the menu beyond hot dogs to reflect the changing tastes of soldiers returning from the war, and then expanded the restaurant itself. He started opening dozens of company- and franchised-owned Nathan's Famous outlets. He published a cookbook of hot dog-based recipes, which we sampled last year.

He also had the revolutionary idea of giving his restaurant managers a six-day work week during their busy summer months.

Wallace McCain might not be as famous as Handwerker, but his products certainly are. Growing up in the heart of Canada's potato farming industry, his brother Harrison formed McCain Foods in 1956, which became the world's largest producer of frozen potato products with Wallace McCain at the helm. McCain Foods produces many of the French fries sold at McDonald's and Wendy's, and potato wedges at KFC sold around the world. They eventually expanded to other frozen foods.

McCain also experienced the growing pains that accompany the industrialization of the food supply. A falling-out with his brother led to McCain being removed from the family's corporation. He then founded Maple Leaf Foods, one of the largest manufacturers of processed foods in Canada. They ran into problems in 2008 when several people died of listeria poisoning from their cold cuts.

The New York Times has detailed obituaries for Murray Handwerker and Wallace McCain.