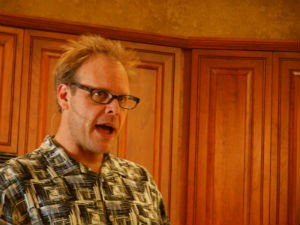 The show will live on in reruns, of course, and Brown recently renewed his contract with the Food Network, meaning we'll probably see more of him on shows like "Iron Chef America".

Perhaps being away from the "Good Eats" grind will allow Brown to spend more time on the road. He's always been a hit in St. Louis, despite making a public educator fight for her lunch and yelling at a representative from Gut Check International for accidentally speaking out of turn.

Allison Rabbitt, a local middle school teacher and sewing guru for Squaresville almost lost her lunch to Brown at a book signing at Left Bank Books.

"We were the last people in line, and when Alton saw my takeout container, he asked what was in it. My star-struck husband snatched it from my hands, said, 'It's a reuben [from Duff's], do you want it? She just cut it in half, she didn't bite out of it!'

Alton put his hand on the box, but I snatched it away and said, 'No way! That's my lunch for tomorrow!' I think I explained my lunch issues and assured him that the reuben was indeed very good."

Rabbitt presented Brown with "a pair of tattoo/pinup girl/hot rod pot holder" she made especially for him. "Alton was very nice, and really liked the pot holders. I like to think of him using them in his real kitchen."

While we await Alton Brown's next antics, here's eight of his best "Good Eats" moments.

The Ceramic Smoker A "Good Eats" classic - taking cheap hardware junk and turning them into kitchen gadgets Sur La Table doesn't want you to know about.

GB&D Golden brown and delicious! Yes, we did need a show devoted to making toast.

Alton Gets Skinny The horror! All that eating made Alton a little chunky. He hauled out fifty pounds of lard and then told his viewers how they could get angular like him.

Butter Up! The weight loss came nearly ten years after Brown's courtroom defense of butter. He doesn't mention what mother the milk has been expressed from, but we now know that Brown has used both bovine and human milk to make butter.

Biker Jerky Brown rides his Hog in to save the day for some hungry bikers with homemade beef jerky. Chocolate Chip Cookies with Alton's Fake Sister She's not really his sister, but an actor. W's not really a food gadget villain, either, but it made for fun TV.

Biscuits with Ma Mae Shortly before she died, Alton Brown's grandmother - the real one, not an actor - showed him up in the biscuit-making department.

In a Pickle With an Evil Twin Oh, the miracles of television! Alton was able to play his own sweet self as well as his evil twin, "B.A." Brown, who likes a sour pickle.

Junkyard Eats Long before Brown started hosting "Iron Chef America", there was "Scrap Iron Chef", where he cooked bacon in a junkyard.

Steaking His Claim, Indeed The first episode of "Good Eats". Not a bad introduction at all, back in the day when the Food Network was about making good food accessible. That's what we miss most of all.