This is part three of Katie Moulton's Chef's Choice profile of Nate Hereford of Niche. Part one can be found here. Part two, a Q&A with Hereford, is published here. 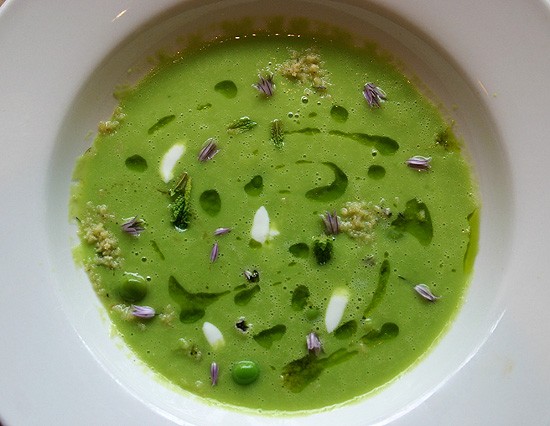 Watching chef de cuisine Nate Hereford in the kitchen at Niche, the observer finally begins to sniff what all the fuss is about. And it smells like chive blossoms.

Hereford is making English pea soup. He uses a blender and a sauce pan, common enough kitchen tools. But then we learn the cream/water base has been reduced and steeped for hours. Then Hereford comments on the greenness of the broth in the pan, that next time he would add less water, which hints at the effort behind each perfectly-presented dish.

"We debate and discuss ideas a lot," Hereford says. "Gerard creates this open environment, which keeps it creative for us." The menu changes by the whim and the season, and Hereford calls this recipe a "collective effort," developed around the idea of the chives and lavender.

The soup goes beyond pureed peas, whose Englishness, by the way, does matter, since peas from across the pond are apparently sweeter, fresher-tasting and stay greener. Hereford adds morsels of flavor to the basin of the bowl, creating a solid surprise within the soup.

Then Hereford "reiterates what's on the inside" by delicately floating blanched peas, teardrops of olive oil, puffs of goat cheese, a hint of fresh mint and breeze-blown tufts of chive blossoms on the soup's surface.

"The garnish is at the whimsy of whoever is making it," Hereford says. "Keep it simple!"

Although at Niche, it seems, simplicity is anything but common.

Sauté onions, leeks, fennel and garlic until translucent. Add cream and water. Boil hard, but be careful it doesn't scorch the bottom of the pot. Reduce for two hours. Steep for one hour. Add peas (cold) to the stock. It is critical to make sure that the cream/water base has cooled down in the steeping process, so once the peas are added they do not oxidize. Puree cold. Strain through a china cap. This last step is not necessary, but gives the soup a nice consistency. Season the soup with salt, to taste.

Brush the brioche with melted butter on both sides, cook on a sheet tray at 300 degrees until the butter has browned. Once browned, flip the bread, continuing to cook, until the bread has dried out. Let cool. Once cooled, chop with a knife to make fine breadcrumbs. I prefer not to use a food processor because the butter will make the breadcrumbs greasy. Buzz the lavender in a coffee grinder. Add a pinch of the lavender to the brioche. Season with salt. It is critical to taste the mixture and add the lavender a little bit at a time, so its flavor isn't too overwhelming.

Loosen the chèvre with cream so it has a spreadable consistency.