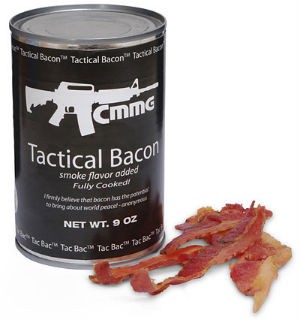 We know food prices are high, but is that an excuse for all the food crimes that have gone down in the past few days?

Quincy D. Davis, DaQuan Marquis Wright, and an unnamed minor from Anderson, Indiana, were arrested on Sunday for bacon theft. The trio's accused of stealing $90 worth of bacon from Strong's Market. Davis and Wright claimed they were watching the burglary. They broke in through the freezer, intending to steal cigarettes and money. When they realized they couldn't get into the store from the freezer, they allegedly stole the bacon.

Davis and Wright's burglary methods, while not successful, weren't nearly as bizarre as failed burglar Michael Cooks, who has the most ironic name in crime. Cooks broke a window in Jennifer Espinoza's Dallas apartment. She found Cooks sitting in her kitchen sink, naked and bloody, eating raw chicken. Police had to use a Tazer on Cooks.

On Saturday night in Chicago, Michael Richards (not the actor who played Kramer on "Seinfeld") was arrested for fighting with a 7-11 cashier who tried to stop Richards from stealing the store's nacho cheese. He'd purchased a bag of chips - not the tortilla chips 7-11 deems appropriate for their hot nacho cheese - and proceeded to pump nacho cheese into the bag. When the cashier told Richards to stop, he continued pumping the cheese while hurling insults at the cashier. Richards was arrested with bond set at $10,000.

And yes, the judge and prosecutor indulged in "not yo cheese" banter.

Also in Chicago, the owner of Felony Franks has taken the city to federal court, claiming his First Amendment rights are being violated. For two years owner Jim Andrews has tried to erect a sign of a jail-bound wiener that reads, "Food so good, it's criminal." The city says the sign sends a bad message to youths in the area. Andrews says that the revenue he's losing over the sign scuffle will cause the ex-convicts he employs to lose their jobs.