May We Suggest a Six-Pound Reuben and a Bud Select? Stadium Sports Bar Opens at Lumiere Place

Media preview nights are a chance for restaurants to pull out all the stops and impress. Last Thursday night marked the preview of the new Stadium Bar and Grill at Lumière Place Casino.

Stadium, which replaced Hubert Keller's steak house, SLeeK, is the epitome of a modern sports bar. The space can pack in more than 200 people, and you have your choice of a wrap-around bar, a lounge area or traditional restaurant seating. Fear not; no matter where you sit, you'll have a view of several of the 52 flat-screen TV monitors that blanket the perimeter. In addition, there's a small stage back-dropped by a six-foot screen from which Fox Sports Midwest will broadcast Cardinals post-game shows. (Click here for entirely gratuitous shot of Fox's Jim Hayes and his awesome toupée.)

It's not hard to imagine watching a game here while being tended to by an effervescent waitstaff that will happily deliver your choice of the bar's 32 beers or sports-themed cocktails. But only time will tell whether a glitzy casino sports bar can pull in a crowd amid the downtown vicinity's abundance of neighborhood bars. Proximity to the Edward Jones Dome won't hurt, but proximity to Laclede's Landing might. 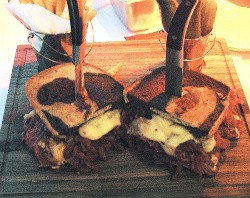 The food served at the media event didn't do much to tip the scales in the casino's favor. The restaurant had set up four stations, each offering samples of a different portion of the menu.

Cod po'boy, which could have used a thicker slice of fish and less mayonnaise.

Then there's the colossal Reuben, two of which were on display. Each sandwich is prepared in a fairly classic style: a mound of juicy corned beef topped by a thin layer of sauerkraut, thousand-island dressing and Swiss cheese, served on marbled rye. The twist. Priced at $50 a pop, each weighs in at six pounds. If you can finish the monster (including fries and pickles), Stadium'll comp your meal, throw in a T-shirt and inscribe your name for posterity on the wall of "Man vs. Reuben."

One woman sent a picture of the two six-pound behemoths to her large-nogginned boyfriend, proclaiming, "These sandwiches are bigger than your head!"

A smaller version that contains a measly half-pound of meat is a fine, if not exceptional, entry in the St. Louis Reuben canon.

The Stadium Sports Bar and Grill officially opens tonight (May 9).