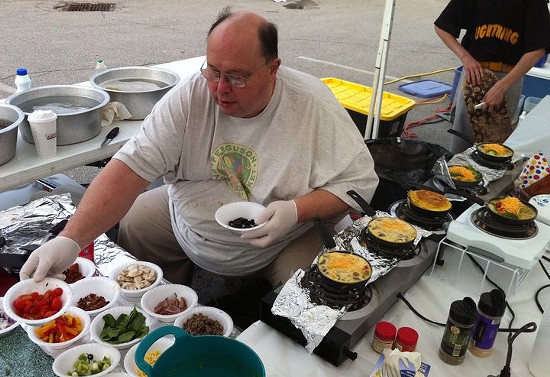 The Ferguson Farmers' Market (Spot Dr. and Florissant Road, 314-324-4298) kicked off its ninth year this last Saturday morning with live music, some reluctant sunshine and a good sized crowd. Among the vendors were various produce farmers, meat producers, craft-makers and bakers as well as a local bee keeper. One thing was for sure, though -- shopping at the crack of 8 a.m. will make a person hungry! Luckily there were two booths that offered sizable breakfast time noshing opportunities for less than three dollars. 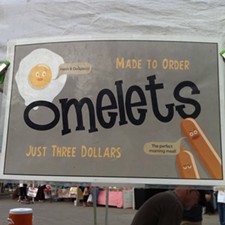 Tom and Jerry's omelet station is run by three boisterous men. Tom Lemp is the man to watch though. Like an off-season Santa he sits on a small cart behind a long row of burners firing six omelets at a time. "Tell 'em about the twelve month pictorial calendar I offer!" he tells me, laughing loudly at his own joke. "Is this article gonna be in the back of the RFT by the sex ads?" More laughing. This man is gold -- all cheer, all fun and a bright spot on a gray morning.

The omelets are a great deal, too - from naked to loaded with ten ingredients all for three dollars each. They arrive in the style of a frittata and are steamy, hot and savory. Come early, though, and expect to wait twenty to thirty minutes for your breakfast. Tom will holler your name a few times, sometimes making up new nicknames for you, to let you know your omelet is up. 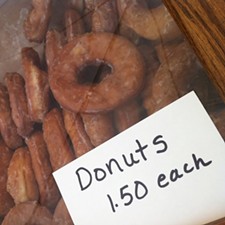 While you wander around waiting for your omelet you might start with a sweet first course. Mast's Produce and Bakery offers seasonal fruits, vegetables, flowers and baked goods from their traditional Amish farm. The first thing you notice, however, when you visit their booth is a large oak and glass case stacked to the brim with glistening golden brown donuts. It is a beautiful sight. At one fifty a pop, it's tempting to buy a couple, but just one of the face-sized donuts could quell any hungry tummy. Traditional yeast-raised donuts have been fried, flipped, fried again and then dipped in a cool sticky sugary glaze. Pulling the downy dough apart will leave a wonderfully sticky coating on your fingers to lick off. Magical donuts made the old-fashioned way.

The Ferguson Farmers Market runs every Saturday from 8am to noon at 20 S. Florissant, 63135 at the Victorian Plaza.