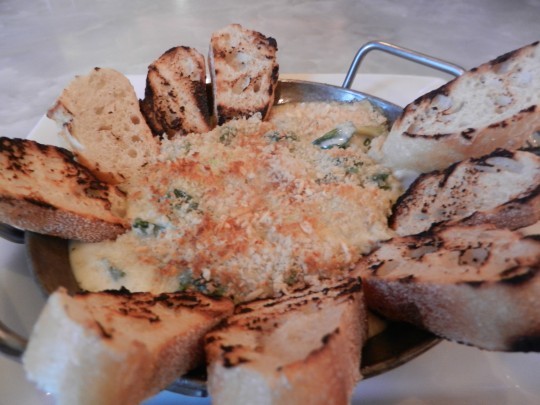 You may have tried a spinach artichoke dip at Applebees. Or Olive Garden. For whatever reason, this calorie-rich delight has become a standard option at the sort of chain restaurant that blooms near the mall.

But you haven't really had spinach artichoke dip until you try the version at Cafe Eau (212 N. Kingshighway Blvd; 314-454-9000), the swanky bar/late night hotspot at the Chase Park Plaza Hotel in the Central West End. In this artichoke dip, you can taste the artichokes. And this is a smartened-up version of a dip that you can't help dipping.

This version isn't the goopy, creamy melange of tiny bits of veggie, overwhelmed by melted cheese, that you get at mall restaurants. It is, instead, almost like a mac-and-cheese -- except instead of pasta, it's wonderfully large chunks of artichokes and real whole spinach leaves, baked in a three-cheese sauce. Adding to the mac-and-cheese vibe, toasted breadcrumbs on top add a bit of crunch.

But the best part of this piping hot dish isn't the dip -- it's the bread. Lightly charred on the outside, soft on the inside, these slices have had the perfect texture every single time we've ordered them here. Forget the heavily seasoned buttery bread coated with garlic you get at lesser restaurants; here, the bread is simple and flavorful, the perfect way to convey a baked artichoke/spinach/cheese/breadcrumb blend to your mouth and down the hatch.