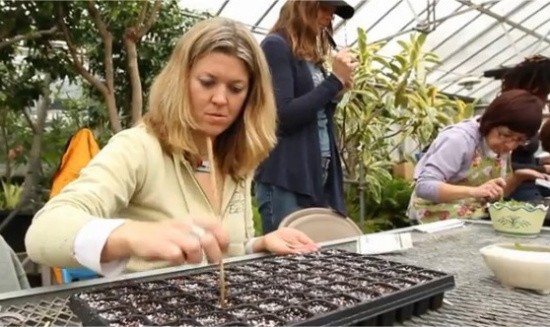 Molly Rockamann grew up in the suburbs of Creve Coeur, where vegetable farms consisted of small tomato gardens in backyards or a few pole beans creeping up the sides of fences. But it was there where Molly developed a real passion for vegetables at an early age. As co-founder and head of EarthDance Farms (233 South Dade Avenue, Ferguson; 314-521-1006), a nonprofit educational organic farm that began in 2009, Molly is able to share her love for all things organic with the many apprentices who come to the farm each season to learn the art of farming. Molly was briefly whisked away from the small farm in Ferguson to San Francisco where she received a Growing Green Award from the Natural Resources Defense Council. But amid the gala dinners and networking, she was able to stop and talk with Gut Check about her beginnings as an organic farmer and how the organic food movement in St. Louis has grown.

Gut Check: As a girl growing up in the suburbs how did find your way into organic farming?

Molly Rockamann: My dad took me to visit the Mueller Organic Farm when I was 15. The farm's been around since 1883. It's the oldest organic farm in Missouri. I must have been a freshman in high school, not able to drive yet. I remember asking my dad if he'd drive me out to the farm in the morning. I grew up in Creve Coeur, so it was a 25-minute drive in the morning before school so I could work on the farm and pick berries before school. He didn't want me to do that because it was a little unreasonable as a high schooler to get up at 5 in the morning, drive to North County to go pick berries then drive back to school.

What was your reaction to visiting the farm?

I was really adamant that I wanted a vegetable garden at home. Our family had grown tomatoes in our back yard. And my grandparents -- I remember going to their garden and seeing these whopping cantaloupes and cauliflowers and thinking they were so cool. I planted probably like 50 plants in a 6-by-10 area, and it became a jungle. I maybe got three things from it. That was my introduction to trying to grow food -- a major failure. I realized I didn't know anything about it.

When you were in college did you have any idea you wanted to be a farmer?

I'm not flat-out a farmer. I do some farming, but I'm not a full-time farmer. We're an educational program first. Going into college, I really wanted to do environmental and outdoor education. I loved working with kids, and I guess there were just so many different things I was interested in. I don't think it was until I went to Ghana and Fiji and came back and took this class called "Hunger, Plenty and Justice" that I realized that everything I was really interested in was connected to agriculture.

What did you do in Ghana?

Initially I was just doing a semester abroad, but I went back five years later to train rural folks, mostly women farmers, on how to use record keeping to improve their farm operations.

How did you decide to start EarthDance?

When I decided to start EarthDance I was probably 24, and I had the name before anything else. I knew I wanted to start an organization that combined my two loves: the environment and dancing. I did an organic farming apprenticeship program in 2005 in Santa Cruz, California, and I was pretty determined to go back to Fiji. I wanted to start a nonprofit there working with farmers to grow organically. I didn't really know anything about farming other than how you should do it, and I didn't have a hands-on perspective.

While in Santa Cruz I remember talking to folks about the dream of EarthDance and then also what I felt compelled to do in Fiji. I remember a lot of friends saying, "well, it sounds like you're a lot more excited about EarthDance than Fiji."

Did you have a plan in mind for what you wanted EarthDance to become?

I didn't exactly start it with the mind of running a training program on the farm. I just wanted to preserve the farm, initially. But then I realized the way to do it was to get more folks involved on the farm. And I thought, well I just paid a bunch of money to go learn farming. Maybe some people would be willing to pay a little money to learn farming in St. Louis. That was really how the program was born.

How have you seen the food movement grow here in St. Louis?

I think so many more people are becoming aware of why it's important to know where your food comes from and how to choose your food. A lot of people are really interested in urban agriculture. I'd love to see more folks interested in scaling up with their growing. Not just doing it in their back yard or school garden, but how can we really grow enough food for the region.

Is it hard to run an organic farm with Monsanto as a neighbor?

There's a lot of activism, and I hope that continues and that big bad neighbor in our back yard -- Monsanto -- can hopefully get a run for its money by people becoming aware of the politics involved with food. I think the focus right now is on supporting our local farmers, and nutrition, but I think we really need to be illuminating the political side of food.

Has your farm had any run-ins with Monsanto?

Not necessarily with Monsanto. I think to them we'd seem too small to worry about, which is a good thing. I want to keep flying a little below the radar with them. At the same time, I want us to be a model of what to do, instead of being on the attack all the time, presenting a viable solution. That's where I'd love for the food movement in St. Louis to go.

Do you think organic farms and factory farms like Monsanto will ever be able to live harmoniously?

I don't see a place for human-made poison in our ecosystem or food supply. I can see the argument they're making, but I think it's very flawed. Basically, I don't believe in coexistence of genetically modified organisms and organics. In fact, biologically, it's not possible because once they contaminate organic seed it can destroy an entire sector of the agriculture economy. I don't mean to say that we can't be progressing. People have been doing genetic breeding for generations, but I don't think we need to do it with white lab coats on and million-dollar greenhouses.

We've had lots of crops that have been difficult. Part of being on land that's been farming vegetables organically for so long is that pests really know where the goods are so they flock to us, unfortunately. That's part of the risk of farming.

How is EarthDance expanding?

This year we have an additional way for folks to get involved. We have an educators learning circle, which was really the response to the number of teachers who were interested in the apprenticeship program but who couldn't commit to the full nine months, ten hours a week. So we wanted a way for teachers who want to get their school on board with the good food movement to tap into resources and also network with those peers. I think that's one of the really great outcomes of the apprenticeship program, that people create connections with other like-minded individuals, and that's what really allows them to do great work with the food movement.

You're working to start a summer-school program on the farm for middle schoolers. Is it more difficult to get kids enthused about farming?

One of the things that's so different about kids is that they have this unbridled enthusiasm for it. I think kids, if they haven't been told that they shouldn't get dirty too much in their lives, they're happy to get dirty. Kids are just into it right away.

Do you have a hard time getting kids to eat the vegetables they've planted?

I think one of the big myths about kids is that they don't like vegetables, and they don't want to eat healthy foods. But if kids are outside and see other people eating vegetables right off the plants, they'll do the same. We'll show them arugula for the first time, and we'll say," do you want to try it?" And they'll take a leaf off and eat it right there. I think most folks can't even imagine kids eating arugula. You can get the whole peer pressure thing to work in your favor. And you got to pick the right kid to try it first so they don't spit it out because then the others will probably think it's gross.

There were vegetables I didn't like before I started growing them -- like radishes, I thought [they] were gross. But now I love radishes. I think that could go for a lot of things. And I have apprentices where that experience really came across to them last year. They thought they hated turnips; they thought they hated okra; they hated kale and had never had it. And then it became their favorite vegetable.

EarthDance is on four-plus acres of the Mueller Organic Farm. Do you have plans to buy more land?

As soon as the farm is up for sale, we're going to be undergoing a major campaign to buy the farm. It's fourteen acres.

What's been your reaction to being the first winner of the Young Food Leader award from the Natural Resources Defense Council?

It's been really incredible. I'm just kind of in this post-event daze. It was really incredible and inspiring. I was so honored to be right up there onstage with the other three folks who won Growing Green Awards.