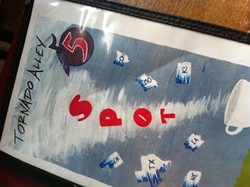 Mike Seely, former RFT staff writer and now editor of our sister paper Seattle Weekly, passes along this item from the Emerald City: 5 Spot, a restaurant that adopts the cuisine of a different region every few months, is currently featuring the foods of...Tornado Alley:


...Seattle Weekly clubs editor Erin K. Thompson had dinner at the 5 Spot Thursday night. Of the decor, she notes that there is "a spinning paper mâché tornado, photos of actual tornadoes, cows and people getting swept up into a tornado, and big paintings, including one of the Kool-Aid guy directing people into a basement while a tornado rages in the background." [Seattle Weekly restaurant critic] Hanna Raskin also ate there recently, and notes: "The soundtrack in the bathroom is a siren and a warning to take cover."

Apparently, the restaurant started its "Tornado Alley" theme before the recent spate of deadly tornadoes in the South, so at least we can absolve it of making a joke in horrible, horrible taste.

Still, should the restaurant have thought twice about it in the first place? Should they change it now? (According to Seely's article, the restaurant has no plans to change the theme.) Or is this much ado about nothing?