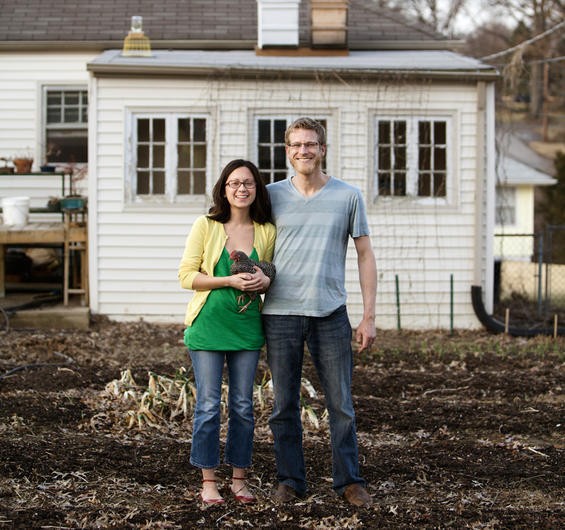 Ever dreamed of butchering your own livestock? Yearned to polish off your medium-rare tenderloin and sigh, "Thanks, Bessie"?

Even if you've merely plotted to take an axe to the neighborhood's rogue rooster, this workshop on raising urban livestock may be for you. Presented as part of Brick City Gardens' agricultural series at Schlafly Bottleworks (7260 Southwest Avenue, 314-241-2337), the workshop will run on Saturday, April 30, 9 a.m. to 12 p.m., and costs $40. Co-instructor Danielle Leszcz says about a dozen people are signed up, but anyone is welcome to show up on the day of the event.

The event will be taught by Justin and Danielle Leszcz of YellowTree Farm, a 3,700-square-foot "urban homestead" in Affton, where the couple has raised all kinds of small livestock. In addition to meat products, YellowTree Farm sells its organic vegetables and the fruits of foraging trips at the Maplewood Farmers' Market in the Bottleworks' parking lot.

We caught up with Danielle for more of the bloody details.

What audience did you have in mind in putting this workshop together? Anyone interested in what it might take to raise livestock; people who want to produce more of their own food themselves.  For families with young children, raising chickens is an excellent way to teach them where eggs come from, as well as some of the finer lessons of biology.   Anyone can raise livestock in an urban setting - not only homeowners, but renters and condo-owners can raise livestock so long as they have blessings from the landlord or subdivision association, and also a little space of land to keep the animals happy. Perhaps the only people not suited for raising livestock are those who travel frequently.   What is the connection between Brick City Gardens and Yellow Tree Farm? Brick City's workshops are affiliated with Slow Food St. Louis, as are we. Slow Food St. Louis has been very supportive of our urban farming endeavors over the past few years. Brick City approached us about whether we'd like to lead this workshop.

What kind of animals do you raise? What will you be discussing? Poultry (including chickens, ducks, turkeys, squab and quail), pigs, goats, and rabbits - and we'll also touch on popular protein sources which we have not raised ourselves, such as meal worms and guinea pigs.

Will there be any live slaughter demonstrations? No. We slaughter our animals to feed ourselves and other people, but not for show.

Do you name your animals? Is that hazardous to a farmer's psyche? While we have named our animals in the past, we generally don't do it anymore.  Slaughtering and eating an animal you've named and bonded with brings a whole deeper level of connectedness and meaning to any meal, certainly. It's not for everyone. And it's certainly not the only way to feel thankful for the energy that feeds us.

What do you think is the impetus of a movement toward urban farming? Do you think it could be called a trend, maybe not in St. Louis, but other major cities? I think we approach urban farming more as a necessity than as a trend. Trends tend to peak and die out -- whereas urban farming and raising these animals requires a sincere commitment.  Ecological concerns, wanting to be good stewards of the land, and food security fears are the main forces driving what we do. I believe most others doing things similar to our way of farming feel the same.

And yes, I believe this will continue to catch on in cities across the nation - especially since many urban areas across the country are tweaking the legislation to accommodate urban agrivists* (*that's agriculture + activist).