The Aussies have the Violet Crumble, and the Brits have Crunchie bars, but if we Yanks want a molasses puff, mass-market candy bars aren't an option. To get the chocolate-covered honeycomb candy, we either shop gourmet or do without.

Generally speaking, molasses puffs are made by mixing hot molasses with baking soda and/or vinegar. The combination foams up, then hardens into a brittle, airy sponge. The color, too, morphs from the almost-black opacity of molasses into a rich gold. The chocolate coating keeps the molasses pieces from soaking up humidity and from sticking together. Plus, it's chocolate.

Because the puffs are made in relatively small batches, each batch can have a slightly different flavor. Sometimes the molasses predominates; other times, it's the chocolate in which the molasses is enrobed.

The Contenders In the red corner, we have the molasses puffs from Merbs Candies (4000 South Grand Boulvard; 314-832-7117). A four-piece assortment came to $3.23, which comes out to $17 per pound. (The online price is $15 a pound plus shipping.) The chocolate melts smoothly onto the tongue, and the puff within dissolves with a lovely effervescence. The candies coated with milk chocolate have a more pronounced molasses flavor than those enrobed in dark, but both the varieties balance nicely with the almost mineral taste of the molasses. 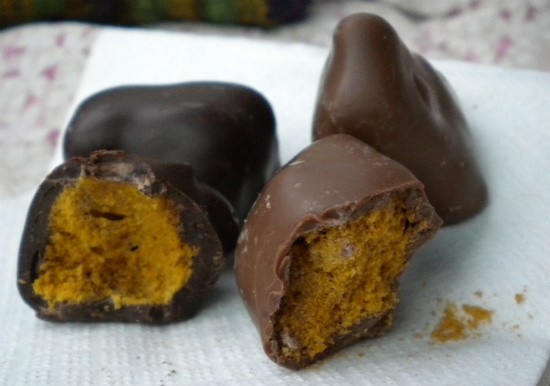 In the blue corner, we have the molasses puffs from Bissinger's (32 Maryland Plaza; 314-367-7750). Long known for high-end chocolates, Bissinger's puffs retail for $33 a pound. A four-piece assortment of dark and milk came to an eye-popping $6.27. It's possible to buy Bissinger's puffs via the catalogue for $30 per pound plus shipping, but if you want both kinds of chocolate, you must buy a full pound of each.

In its catalogue, Bissinger's touts the health benefits of molasses, "which offers an array of nutrients: manganese, iron, potassium, calcium."

All that from a piece of candy! But the real question here is: Are Bissinger's puffs twice as good as Merbs'?

The darker puffs have a thick chocolate coating of what is clearly a high-quality dark chocolate, which balances out the tang of the molasses center. The milk-chocolate puffs, though, are bland by contrast. Something about the flavor profiles of the chocolate and the center seem to cancel each other out. Perhaps that all-dark box isn't such a bad idea.

The Verdict Both companies made a delicious candy, but given the price-to-quality ratio, Merbs wins, hands down.