Hanging with the Ducks at Royal Chinese Barbecue

April 25, 2011 at 7:00 AM
comment
Welcome to Lunch Bucket List, a recurring feature in which Gut Check checks out the many lunch specials available at restaurants around town. Know a lunch special we should check out? Drop us a line. 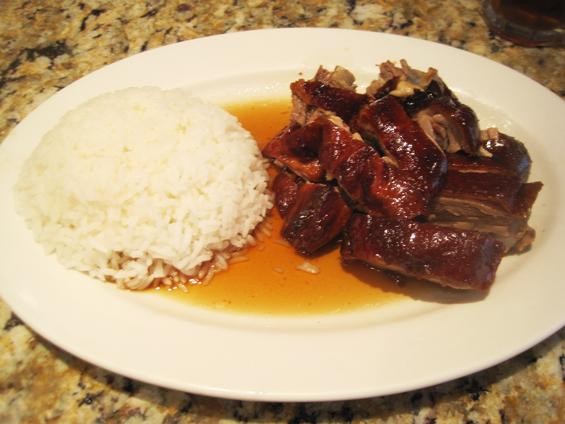 The Place: Royal Chinese Barbecue (8406 Olive Boulevard, University City; 314-991-1888), one of the mainstays of the University City Chinese-restaurant scene, maybe best known for the roasted ducks that hang behind glass just inside the entrance.

The Deal: A selection from the restaurant's lunch menu, roast duck over rice, with a cup of egg-drop soup, for $7.50

Chinese restaurants are a favorite of the budget-lunch crowd. Though they usually don't advertise "specials," per se, their lunch menus can offer great values: a meat or vegetable entrée, with a cup of soup and/or an egg roll or crab rangoon or two for well under ten bucks.

Now, this meal at Royal Chinese Barbecue won't deliver the most bang for your $7.50. Besides a modest portion of roast duck -- less meat that it might seem judging by the photo because of the bones -- and the obligatory lump of white rice, you receive only a cup of egg-drop soup.

The duck itself is pretty good, though. The mahogany skin is crisp. The meat is richly flavored and tender. The juices pooled on the bottom of the plate, though not lending themselves to food pornography, gave character and a hint of sweetness to the plain ol' rice.

The Verdict: Not a tremendous deal, relative to other Chinese restaurants in the area, but by no means exorbitant for a decent lunch-sized plate of duck.