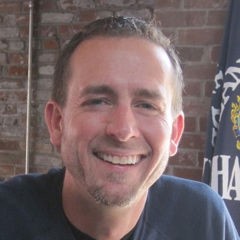 So Stone Brewing's selling their beer in Missouri. What's the big deal?

Greg Koch, the company's co-founder and CEO came to Missouri to kick off Stone Brewing's debut. His second order of business in St. Louis, after a beer-pairing lunch at Pi, was to gather members of the food press at International Tap House to chat.

Why? Because he enjoys it.

CEOs doesn't have to visit new businesses selling their products. But most CEOs aren't sporting temporary tattoos of their own screaming faces on their hands, either. Koch does both. 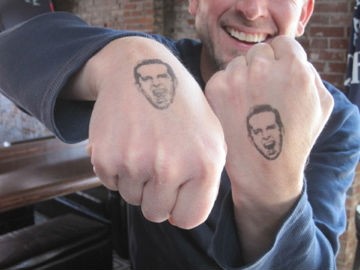 Koch co-founded Stone Brewing in San Diego County, California, with Steve Wagner, which he jokes happened because they were brewing too much beer for it to be a hobby and were veering into "having a problem" territory. That was fifteen years ago, and Koch, still a self-professed "beer geek", loves gathering with fellow geeks and talking about beer. Which brings him to new markets like St. Louis.

Stone Brewing's philosophies focus on quality and uniqueness above mass appeal. "I fundamentally appreciate that people will choose great quality if the bad options aren't there," he said.

So far, it's worked. The company boasts 39% growth per year. In 2006 they opened a new brewing facility that allowed them to increase annual production from 36,000 barrels to 115,000 barrels last year. The facility's capable of producing 250,000 barrels a year.

It took Stone Brewing a long time to arrive in Missouri, their 36th state and the last with major metro areas that can support a craft beer community. "We haven't entered new states without being able to supply them," said Koch.

The company has a two requirements before going through the legal red tape to distribute in a state. First, there has to be enough demand for their beer that they can fill the shipping trucks. Second, there has to be enough interest and enthusiasm to keep sending those trucks so beer isn't languishing on the shelves and losing quality.

Twenty-four Stone Brewing taps lined ITap's wall during the meeting, with only nine available. The rest were tapped at an event Thursday night. That's a lot of beer to meet the demand. Koch said, "It always confuses me when people complain about too many choices." Which might be why the company produces several IPAs while others stick to just one.

"I don't believe the words 'light' and 'beer' should be used in the same sentence, except the sentence I'm saying right now," Koch said of the company's "no fizzy yellow beer" policy. The lightest flavored beer of the flight was the deceptively caramel-colored Stone Levitation Ale. The beer's front carries some of the caramel flavor, but there's barely any finish. With such a mild flavor, it's a beer that will appeal to pilsner and lager-drinkers, if they can get past the gorgeous color. It's not a beer for drinkers looking for big flavor.

Stone Cali-Belgique IPA combines so many styles that it could be a giant wreck. It's not. The Belgian spiced citrus traits blend with a slight hoppy bite and a warm wheat finish. Drink it to add some complexity to a warm afternoon in a hammock.

Stone Ruination IPA doesn't come on with a blast of hops. Instead, it starts with a light fruitiness balanced with a controlled bitterness from the hops. It's not a walloping IPA that screams, "Hops!!" And that's not a bad thing. It's a good introduction for the IPA-phobic.

OAKED Arrogant Bastard Ale takes their flagship ale and puts it in oak. With a distinct woody aroma that carries into the flavor, it's a big beer with a delicate balance, which seems to be Stone Brewing's standard.

Stone Smoked Porter sports a thick, creamy head, which tempers the smokiness. There's a light malt sweetness that follows the warmth of the smoke.

While Stone Brewing boasts about their big beers, arrogance, and goes so far as to say, "This is an aggressive beer. You probably won't like it. It is quite doubtful that you have the taste or sophistication to be able to appreciate an ale of this quality and depth," their beers are far more subtle and complex. . Fizzy and yellow? Definitely not, but well-balanced enough that the patient and adventurous craft beer novice will probably find something appealing.

Just as long as they're not intimidated by the screaming face tats.