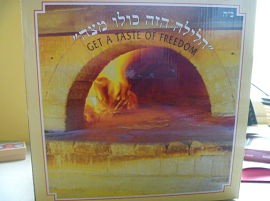 The Jewish holiday of Passover and its oppressive dietary regime of eight days of matzo has descended up on us with the surety of the Angel of Death. Yeah, yeah, it's hard to compare a week of eating cardboard with the slaughter of all the Egyptian firstborn (the Angel even got the cattle!), but we presume that at least the death was quick and relatively painless. And matzo is called -- in the haggadah, the sacred text of the Passover seder, no less! -- the "bread of affliction."

According to legend (also reprinted in the haggadah), when our forefathers and -mothers finally got to leave Egypt, they had to skip town so quickly, they didn't have time to let their bread rise. For some reason, though, they decided they had time to bake said bread, so now, 4,000 years later, we remember them by eating matzo.

A few years ago, during the Great Matzo Shortage of 2008, Friend of Gut Check Rabbi Hershey Novack stockpiled 32 boxes of the stuff. He explained his hoarding thus: "It's good to have in case of an earthquake. It lasts for hundreds of years. When the archaeologists in the future look through the rubble to find out what we ate, the only thing they're going to find is matzo."

Can matzo really last that long? Wouldn't we taste some evidence of staleness or spoilage? Gut Check endeavored to find out.

Regrettably, Gut Check doesn't have matzo that's hundreds of years old, but in '08 we learned our lesson and began storing our uneaten matzo under the kitchen sink. Since Manischewitz, the leading maker of our nation's matzo, has a charming habit of printing the year of production on its packaging (just like bottles of fine wine!), we knew exactly how old each box was.

We assembled boxes of Manischewitz from 2008, 2009 and 2011 and, just for fun, some super-holy Matzo Shmuroh handmade in Israel, also in 2008. (We lacked the Manischewitz 2010 because New York Times food guru Mark Bittman saved our life last year -- almost like Moses! -- by writing a column introducing the world to his olive oil matzo. Its holiness may be suspect, but it tastes infinitely better. We converted our sad little box of Manischewitz into Smitten Kitchen's chocolate caramel crack(ers), which is the best thing that could have ever happened to it.)

Then we coerced our co-workers into participating in a blind taste test to see if they could tell the difference between the various vintages. Gut Check takes this sort of thing very seriously: We prepared a questionnaire and asked everyone to rate the four different matzot on the criteria of crunch, amount of flavor, swallowability and overall taste on a scale of one to four, one being the best. We also added a bonus question: "Would you want to eat this instead of bread for eight days straight?"

And then the fun began.

One by one, ten of our unsuspecting colleagues wandered into our cubicle.

"I'm weird about trying new things," one confided. She left almost immediately. "I need to get water to get the taste out." After a few experimental nibbles, she turned reflective. "It tastes like something really tasteless," she said. "You know that challenge when you have to eat eight crackers in under a minute? It would be way harder if you used this." Upon leaving for good, she dispensed some advice: "Next time, bring some spread. Don't just half-ass it."

"There's a pretty small degree of difference," another told us. He closed his eyes, presumably to be able to taste better, and popped a piece of the Manischewitz 2011 into his mouth. "Mmmmm! But if I hadn't had the others, I probably wouldn't say that."

"None of them have any flavor!" a third complained. He took his tasting responsibilities seriously, though, and spread the four samples on his lap so he could take multiple bites. When he left, he scattered a lot of crumbs on the floor.

Another taster choked on the Manischewitz 2009.

"Would I eat this for eight days sober?" a visitor asked. "Hell no." We told her about the custom of drinking four cups of wine at seder (a quantity sometimes interpreted as four bottles, per person). She brightened. "Now that's something I can get behind!"

A like-minded colleague saw some (slight) potential for matzo as a bar snack. "If I had a cocktail, I would eat it," she said, "even though it doesn't taste good. But it's something to chew on. If I were at a bar, I would eat a lot of this, but probably not as much as bar mix."

Our final taster had the most sophisticated palate of all. He was particularly fascinated by the Matzo Schmuroh, which was darker and flatter than the others. "Matzo doesn't have any flavor, really," he opined, "but this one has texture and crumb. It probably wasn't made with enriched white flour, was it?"

We checked the box, but the list of ingredients was written in Hebrew.

Only one taster returned for extra matzo. He favored the Manischewitz 2011. At first we worried that there was something wrong with him. "Oh, I'm always hungry, and I'll eat anything," he told us cheerfully. We were reassured.

In the end, none of the matzot received especially stellar reviews. The Matzo Schmuroh led the pack for crunch, while the Manischewitz 2011 was considered the most flavorful. None of the samples had a particularly high swallowability factor, but the Manischewitz 2008 and 2011 went down easiest.

The answers for the bonus question were almost unanimous: Nine of the ten said no. (Actually, a couple added a "hell" before the "no" and another circled a white space that he said represented a much more emphatic version of "no.")

Gut Check is unsure what to make of these results. Was 2009 a particularly bad year for Manischewitz matzo? Should we issue a warning to hoarders and tell them to cherish their 2008 instead? And how will the other vintages age?

We'd like to think we'd at least be able to answer the final question, but we're not so sure: It's highly unlikely we can hoodwink our colleagues into doing another taste test next year.