This is part three of Chrissy Wilmes' Chef's Choice profile of Jeff Robtoy of the Bleeding Deacon Public House in south St. Louis. Part one can be found here. Part two, a Q&A with Robtoy, is here.

Jeff Robtoy's creativity goes far beyond the kitchen. He's an art school grad, a printmaker, bookbinder and musician. For that matter, the entire staff at the Bleeding Deacon Public House (4123 Chippewa St., St. Louis; 314-772-1813) is littered with artist and musician types, and the creative ideas flow freely. "They're always experimenting, asking me questions, trying new stuff. And that's great -- that keeps me on my toes," Robtoy says.

All of that friendly competitive creativity results in dishes like the 'Wich Came First -- a sandwich that features the chicken and the egg.

Purée mayo and red pepper in food processor until blended. Reserve in fridge for at least six hours.

Grill chicken until fully cooked and top with Swiss and bacon. Melt by covering with a pan.

Bake bun at 350 degrees until toasted.

Fry egg until white is fully cooked and yolk is runny. 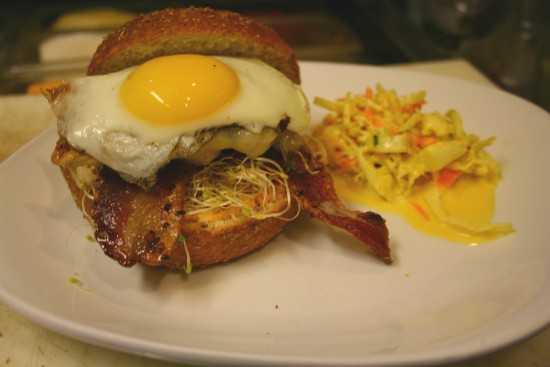