#4: The Ribs at Pappy's Smokehouse 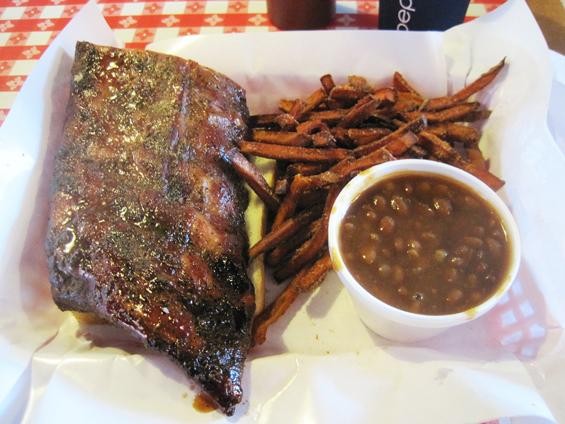 I spent the past week stuck in my house with a sprained ankle. I hobbled around on crutches. I didn't eat very well. The most strenuous activity I undertook was opening a new browser window on my laptop.

Today, I was able to abandon the crutches for a sturdy and oh-so-discreet support stirrup. The first place -- the only place -- I wanted to eat once I was free to leave the house?

That it was high time for the beloved barbecue joint's appearance on this list was just a happy coincidence.

What more is there to say about Pappy's Smokehouse -- except, to the two women behind me today who bailed from the line halfway to the register, "What the hell were you thinking?"

The ribs are my go-to order here, smoked over apple and cherry wood and seasoned perfectly: a zing of black pepper, that beguiling rosemary note. And, above all else, the sweet-savory hit of pork cooked hour after hour after hour...

My lunch was more than enough to improve my mood, but just visiting Pappy's lifts my spirits. The regulars. The tourists. The fans having their picture taken with the sunglasses-bedecked pig's head mounted on the wall or, if the pig's not available, with Mike Emerson. The whole damn bustle of the place. It's the most communal dining experience in St. Louis, and it never fails to bring a smile to my face.

(By the way: I didn't visit Bogart's Smokehouse in Soulard, featuring pitmaster Skip Steele and several other Pappy's vets, until after I'd finalized my 100 Favorite Dishes, but if there is ever a sequel, without doubt Bogart's will make an appearance -- a certain smoked prime rib sandwich or maybe the pastrami.... Consider that an early tease for next week's review.)