Salt: Wesley Johnson's Latest Venture Is a Restaurant to Savor 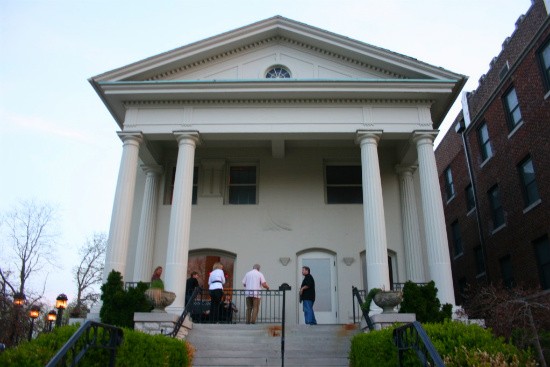 Driving down Lindell, it's easy to misconstrue the beautiful building Salt occupies as a residence. The white, pillared manse -- which in fact is a former residence, albeit a big-ass one --identifies itself by only a simple street number and is otherwise unmarked. Step into the courtyard, though, and there's no mistaking Salt for what it is.

Unadorned by cloths, the tables littered across the courtyard are set with cream-colored napkins, miniature salt and pepper shakers and glass decanters for water.

Like the recently opened restaurant's name, the settings are simple and straightforward.

Salt's interior continues the simple-but-chic theme on the main floor, with crisp white table settings and mirrors dominating the scheme. But a trip to the second floor (by stairs or elevator) reveals what quite possibly are the most ornate restrooms in all of St. Louis.

Things are just as striking outside those second-floor loos. The upstairs dining room trades all the whites from the floor below for vibrant red and gold.

This is the first restaurant chef Wesley Johnson's has both owned and operated, and he takes pride in its décor as well as the menu. (Kirk Warner, chef/owner of the previous occupant, Savor, restored the space and transformed it from a residence into an eatery; Johnson had only to hang new artwork, replace some carpet and paint one room.)

The menu is divided into five category headings: Cheeses, Charcuterie, Small Plates, Large Plates and Sweets. For this First Look, Gut Check went the small-plates route, settling on a goat cheese plate, a cup of carrot ginger soup and a pear salad. The soup was recommended by our server when we requested a vegetarian option, having seen none listed as such on the menu. Ditto the pear salad, which was suggested when we asked to be steered toward a good choice for a carnivore. The cheese plate simply looked too good to pass up.

The goat cheese, which comes from a local producer, is creamier and less crumbly than plain-old store-bought, with just the right tinge of natural sweetness. It was served with triangles of crisp and lightly seasoned flatbread, cherries in a sweet syrup and young pickled walnuts. If walnuts are a natural foil for goat cheese, pickled walnuts up the ante. Heck, while we're at the poker-imagery table, the walnut-cherry combo merits a raise.

The carrot ginger soup (with a hint of curry) was tasty, but a bit much. Really: The serving size seemed too generous for the treatment, which would have shown more brightly as a small side serving (à la the applesauce, its less-interesting accompaniment). 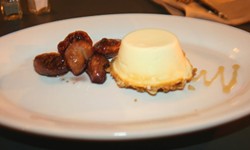 The pear salad was simple: slices of the fruit, dotted with blueberries and hunks of smoked jowl bacon. The bacon flavor was light, perhaps a little too light to carry the dish, as all the flavors seemed to clash on the same level rather than blend harmoniously. In the end, an interesting dish with a lot of potential, and a lot left on our plate.

Goat cheese cheesecake? Yes, yes, a thousand times, yes. A single, small round of cheesecake cast all critical thoughts aside. When you think about it, goat cheese is a perfect choice for cheesecake, given its cheesecake-like texture and its assertive but not overbearing flavor personality. The cake was complemented by a few candied figs -- another match made in goat cheese heaven.

By the way, if you visit Salt, Gut Check recommends you venture down to the basement dining room. The enormous wine rack is something to behold, as is the luxurious elevator, whose walls are lined in gorgeous fabric.