Kristopher Janik, executive chef at Robust Wine Bar & Cafe in Webster Groves, has been raising chickens as a hobby in his South City backyard for the past year.  The man loves his birds. But he's not the only one.

Gut Check: What have you got, chicken-wise?

Kris Janik:  Well, right now I have two hens. There's the Partridge Rock, she's beautiful. And then an Araucana. Man, she can really fly. Every chicken is different. They have their own personalities. I also have some baby chicks I'm keeping in the garage.

We understand you had a possum problem.

Yeah. My one hen used to love sleeping on the stairs under our back door at night. At the time, I kept the back flood lights off so they could sleep, and the coop I was building wasn't ready yet.

A couple of months ago, it was really late, and I go out for a smoke. I turned on the light and I saw this possum just two steps away from my chicken. So she perked up and started making a bunch of noise.

Then -- and this is kinda hoosier -- I grabbed my garden machete and chased the possum. It jumped up on the fence.  I was debating: Do I kill this stupid thing? They're not terribly fast. Then I had this moment of compassion and let it go.

Two days later, I came home and my chicken was dead.

How do you know the possum murdered it?

I've already lost two chickens to hawks. If it's a hawk, there will be feathers all around. But whatever killed this chicken just ate its head. That's what pissed me off the most. At least the hawks got a good amount of it.

So how are you protecting them now, while your coop is getting built?

I put them up under my four-season room at night. That keeps them nice and dry and warm, and keeps the possums and raccoons out. What worries me most are raccoons. They can figure out how to turn a latch.

But I've learned a lot in the last year. One of my favorite chickens unfortunately had to die in the process. But she's making good fertilizer now. I buried her in one of my raised beds.

Apropos - what are other perks of raising your own birds?

Chickens can do wonders for your soil. They poop, they till it up. They're great pest control.

Do you eat them?

[My girlfriend] won't let me eat the chickens themselves. But we eat the eggs, and you can taste the difference. Sometimes it's subtle, but they just taste more like eggs. The yolks tend to be brighter. I've used them in omlettes, soups, creme brulees, cakes.

No. That's not to say that the war is over. I bought a pellet gun. But I haven't had to use it. Yet. 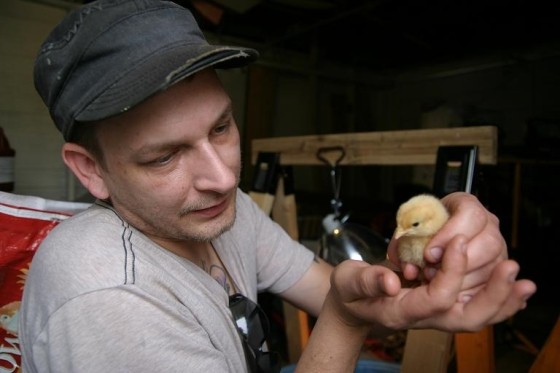